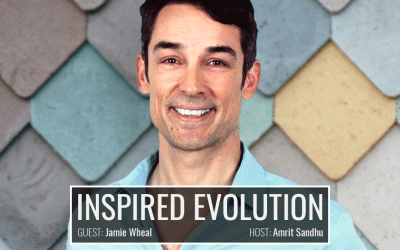 Our guest for this week is Jamie Wheal, an expert on peak performance, the co-founder and executive director of the Flow Genome Project and co-author of “Stealing Fire”.

Jamie’s background is an amalgamation of expeditionary education, wilderness medicine, and surf rescue. He has over a decade of experience advising high-growth companies on strategy, execution, and leadership. His client list is a who’s who of top corporate executives including the owners of NFL, NBA, MLB, and Premier League teams, executives of Google, Goldman Sachs, Deloitte, Cisco. Jamie has also worked with the U.S. Naval War College and Special Operations Command and advised the athletes of Red Bull on the topic of peak performance.

In 2015, he co-founded the Flow Genome Project and he is leading an international team of world’s renowned scientists, athletes and artists with a goal of mapping the genome of peak performance state also known as Flow. Their vision is rooted in “taking a rigorous, multidisciplinary and supremely practical approach to the science and research of peak-performance.” As self-described “flow hackers” the end goal of the Flow Genom Project is to use this research to help more people level up in their actual lives.

Along with Steven Kotler, Jamie co-authored the global bestseller titled “Stealing Fire: Silicon Valley, Navy SEALs and Maverick Scientists are Revolutionizing the Way We Live”. In it, they explore the many ways how the world’s most successful people use altered states in order to unlock peak performance.

In order to further clarify the topic of Jamie’s studies, we start off our conversation by making a clear distinction between altered states of conscious and NOSCs which stands for ‘Non-Ordinary States of Consciousness’. This is a much more appropriate and precise term originally coined by Dr. Stan Grof. These states are one of the topics in Jamie’s book ‘Stealing Fire’ and they can be meditative, contemplative, states brought on by smart technology, psychedelic, sexual, athletic, kinetic or artistic.

“Basically all the positive non-ordinary states you can think of that seem to share an awful lot underneath the hood of the mechanism of action. What’s happening in our bodies and brains to get us there.” – Jamie Wheal

We dive further and deeper into the exploration of these non-ordinary states and Jamie makes yet another key distinction which helps us understand this problematic from a historical perspective. On the point of recognizing and appreciating different states of consciousness, we differentiate between monophasic and polyphasic culture. Polyphasic culture accepts different channels of consciousness, while later, during the age of enlightenment in the 18th century, mainstream ideas shifted towards the monophasic culture, focusing exclusively on the basic sensory input, an approach that gave birth to the idea of the rational self-aware waking self.

Jamie points out that this shift has left a significant mark on our society and he argues that there’s a good chance this idea of being closed off to different channels of consciousness is causing all sorts of contemporary “diseases of despair”, which include anxiety, depression, insomnia, etc. He sees the solution in determining and accepting a post-conventional polyphasic culture in order to utilize these non-ordinary states of consciousness in order to both maximize our peak performance and “bring our collective project forward”.

“You take breathing, respiration, movement, music, sexuality and then skillful use of substances and you can combine them and stack them in ways that can provide really profound peak experiences.” – Jamie Wheal

Jamie proceeds to explore each of these methods of evoking non-ordinary states of consciousness how it can help you achieve peak performance. From controlled breathing to patterns of skilfull movement to listening to compelling music to harnessing the neurochemistry of the conscious sexuality all in the service of accelerated human development. He proceeds to explore a vast amount of intriguing cases and studies regarding the potentials of sexuality in particular, one being the comparison between the resemblance in the ways MDMA and orgasm affect our brain chemistry and neurophysiology. The way he envisions the purpose of these practices is essentially a reset of the nervous system in order to preserve and improve mental and physical health.

We step away from the individual and focus more on the collective in this part of our conversation. Jamie elaborates on the relationship between peak performance and the potential for healing or getting a release. To put in another way, we discuss the relationship between ecstasis and catharsis. However, these experiences are often not occurring in isolation. We rather seek to share our experiences and through communitas or “group flow” we connect. We bond in order to create “a reservoir of trust” as Jamie puts it, “which allows us to do hard things together.”

When we discuss the potential habits of people that are taking us in the wrong direction, Jamie has a collection of creative terms at his disposal. Yet, behind the ideas such as “hungry ghosts,” the true issue lies and we’ll need to deal with in the years to come. We need to fight off the role we have been conditionalized into which is the role of the hyper-individualized consumer purged by the need for instant gratification. But we need to do so in a way that allows us to regain our humanity and not to lose grasp of it completely in the transition.

“We have to practice ‘discipline of enoughness’ and we have to seek the actual nutrients that we need like love, connection, belonging, contribution creativity… Good, old-fashioned, human stuff.” – Jamie Wheal

This podcast is an amazing opportunity for us to broaden our horizons and reexamine what we value as a society. Jamie’s expertise is vast and diverse yet probably the most impressive thing is the practical, “call to action” vibe of his message of Inspired Evolution, which he portrays by also leading the way. It is most certainly true that without proper action, any form of enlightenment is rendered pointless. That is why I wholeheartedly support Jamie when he is saying that:

“The best antidote to anxiety and existential wondering right now is, go help somebody less fortunate than you.” – Jamie Wheal