Mountains and Marathons with Jen Ziegner and Jamin Heppell 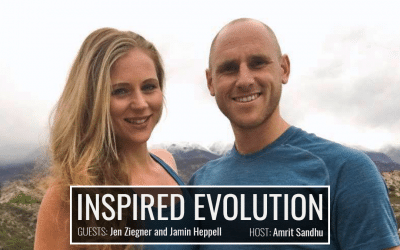 Our guests for this week are Jen Ziegner and Jamin Heppell, the co-founders of Mountains and Marathons, and they develop transformative leadership programs that center around completing a marathon or climbing a mountain in some of the world’s most stunning locations.

Jen is a certified Strategic Intervention coach, and she received her credentials from the official training school of Tony Robbins. Her educational background is a Master’s degree in Strategy and Innovation from AUT University. Jen has worked with over 100 purpose-driven businesses in Europe, New Zealand and Australia and has led an impact investing initiative that supported mission-driven entrepreneurs towards their first capital raise.

Jamin’s professional career was mostly spent in the field of helping people develop health and resilience. He was the director of three leading organizations and has worked with over 15 000 people from diverse communities all over Australia and North America.

In 2016, they co-founded Mountains and Marathons in order to help people who are motivated, curious and want to take their career to the next level while making a positive impact on society. They offer transformative leadership programs centered around preparation and completion of challenging physical feats that involve some of the world’s most beautiful places. For 6 months, they provide their clients with physical training, mindset coaching, and community support. The main goal of the programs is to help people develop courage, clarity, and confidence which they will later use to take the next big step in their life and career. So far, they’ve been to San Francisco, conquered the Great Wall of China and climbed Mont Blanc, with mesmerizing projects involving Everest and Melbourne on the way.

Both Jen and Jamin have taken the path of inspired evolution, dealing with challenges and adversity head-on, coming out the other end transformed and determined to help others do the same.

Jamin was running three independent companies and they were all focused on social change and community development. He found himself in a situation of constantly giving, day in, day out, spending little to no time to replenish his energy and take care of himself.

“To use the analogy of your cup being full before you can then give to others, I was just continuing to take from the reserve tank more and more.” – Jamin Heppell

Even though with intentions in mind, by not taking care of his own personal mental health, Jamin ended up in a dark place, feeling burnt out and depressed. Through introspection and reflection, he was able to come up with a very insightful observation. He realized that his own choices were the cause of his problems, but rather than dwelling on this thought and beating himself up about it, he understood that his choices have the power to take him out of this place and give him the opportunity to transform.

“There were two questions… “If I were to live my most values aligned life, how would my life be different?” And then the follow-up question to that was: “If I could do anything in the world right now, what would I be doing?” – Jamin Heppell

It just so happens that the answer to his question was “running marathons and climbing mountains all around the world.”

Jen and Jamin met a little after Jamin had the idea for Mountains and Marathons. Her first impression was that it wasn’t something she’d be interested in.

“I grew up as a super unfit child, I’ve never done any sports and earlier in my life I’ve made up this whole identity of “I’m a person who can’t do much, physically”, and never ran more than a 5k.” – Jen Ziegner

But when she realized that the narrative of not being an athletic type was her own creation, she also felt that she could do something about it. Similarly to Jamin, she used the realization of her own contributions to the problem in order to fuel and empower herself to overcome it. The whole story coincided with her feeling unchallenged in her professional life. To a sense, you could say that Jen and Jamin were their own first clients.

“Where this got created from is such a place of a deep inquiry.” – Jamin Heppell

The imposter syndrome is defined as “a psychological pattern in which an individual doubts their accomplishments and has a persistent internalized fear of being exposed as a “fraud”. Even though the evidence of a person’s competence is clear to everyone else, they remain convinced that they don’t deserve what they’ve achieved. Jamin lists constant confrontation of the imposter syndrome as one of his deepest personal adversities. Every day he challenges the notion of being undeserving by reminding himself of the values and all the good behind the work he and Jen are doing.

“It’s usually when I’m not feeling good or when the bad stories are coming up and all the stories that are holding me back, it comes from a place of comparison.” – Jen Ziegner

Jen takes us further on our exploration of the imposter syndrome and shares her insights regarding why and when are these irrational thoughts most potent. The main weapon both Jen and Jamin are wielding to preserve themselves from being affected is centered with the idea that their work is reflecting their deepest values. By always having that safety line, they are able to draw strength from it and successfully deal with bad thoughts.

A Message of Inspired Evolution

“It really is about creating an adventurous opportunity to really transform your life from one stage to the next in whatever context that is.” – Jamin Heppell

Jen’s and Jamin’s inspirational story is one of creating experiences through choice and choosing your identity beyond its limitations. The programmes they’ve created are comprised of courage and in their foundation are calls to action. Inviting us to take action in our lives and make that transition no matter how afraid we are. By doing so we will find that:

“On the other side of fear is nothing but possibility.” – Jamin and Jen