Know and Accept That You’re Enough with Marisa Peer 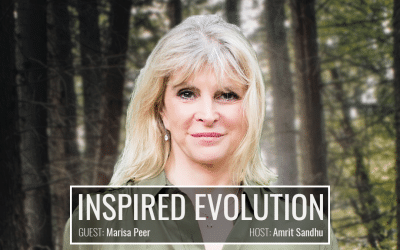 Know and accept that you’re enough.

Our guest for this week is Marisa Peer, a best-selling author, motivational speaker, a leading celebrity therapist and a pioneering hypnotherapist trainer.

Marisa began her journey studying to become a child psychologist but has later built on her career by earning further qualifications at the institute from the Hypnosis Training Institute of Los Angeles and the Pritikin Longevity Centre. She possesses a deep insight into the world of nutrition as well and was introduced to it through her own personal struggles. Marisa herself had been battling with an eating disorder throughout the first 20 years of her life.

Her title of a best-selling author came to be as a result of 4 remarkably successful books, on various subjects. From teaching you improve your life by reprogramming your brain, Marisa will help you establish healthier relationships with the food you eat, build and fortify your self-esteem and self-confidence, and even increase your fertility! The subject of her last book titled You Can Be Younger was a revolutionary approach to the age-old question of how to stay young. She elaborates on how positive thinking can lead to the arrest of the aging process, all made possible by the power of your subconscious mind.

Marisa is also the UK’s leading motivational speaker, and over the years, her lectures and talks have become available all over the internet. She has held two Ted Talks, one on the topic of the gaining connection and avoiding rejection, and the other focusing on how training your mind can help you go beyond your perceived and constructed limits. Her YouTube channel also has a ton of free useful mini-courses you can explore and try out.

Marisa’s renowned for her therapy work, with an astonishing list of clients that include many of the world’s finest international superstars, CEOs, Olympic athletes and even royalty! Aside from sharing her wonderful anecdotes, spot on analogies and profound wisdom, she will be giving us precious insight into her innovative process called Rapid Transformational Therapy, or RTT.

A Case of a Modern Day Celebrity in Distress

“I don’t do what other therapists do.” – Marisa Peer

Many of Marisa’s clients are very popular celebrities and she was very kind to share details of a specific case involving an actor in time of mental crisis. He has refused to go to work, expressing symptoms and behavior Marisa immediately recognizes and shines a new light on the problems presented.

“If I was a doctor giving you a diagnosis, here’s my diagnosis – you just don’t think you’re good enough do you?” – Marisa Peer

The first part of her process involves detective-like work, where she intends to quickly determine the root of the problem, usually dating to the period of early childhood. The second part is metaphorically compared to dentistry, as she is determined to pull out and remove all of the negativity clouding over her client.

Her fast-paced approach to therapy has given her client the much needed mental clarity, a fresh definition of his problems and most importantly, a direct way of dealing with them. The self-conditioning and positive self-talk seek to imprint the mind with a simple, precise and a positive message – “I am enough”.

At the end of the segment, she also reflects on a particular case in which her patient had a severe problem with alcohol. The main distinction Marisa made right off the bat was between the presenting and the underlying problem. While conventional therapy may suggest dealing with alcoholism as the key strategy, Marisa shifts focus to the underlying problem – the fact that her client has been perceiving himself as “unlovable”.

“You can put someone like that in AA, you can detox them, but you’re detoxing the problem, and not what lies beneath.” – Marisa Peer

We are constantly hearing about many different mental health issues and disorders that we should be guarding ourselves against, but Marisa breaks them down into three basic concepts:

We’ve gone through the first problem to some detail in the first part of our conversation, and some of his variations (eg. “I’m not lovable enough” or “I’m not wealthy enough”).

The second issue is a matter of failing to fit in. Not being able to connect and avoid rejection, which are the fundamental needs we all need to fulfill in our everyday lives. The fear of being rejected often plays out as a self-fulfilling prophecy, leaving the person with a rationalization that they can not connect because they are different. The feeling that people troubled with this type of problem are left with is what is commonly referred to as depression.

The last issue is the problem of not being able to have or acquire something that is desired. But in its core, wanting something that is not available, is a problem of having negative, destructive, unconscious beliefs that ultimately determine your life and prove to be self-fulfilling.

“There’s nothing that will grow your self-esteem like praise, and nothing will diminish it like your own criticism.” – Marisa Peer

The self-dialogue is an essential tool that ultimately leads to change. Whether you decide to speak to yourself in a positive, optimistic way, or in a negative, pessimistic and at times fatalistic manner, your mind will react and adapt accordingly. Everyday conversations with ourselves leave a pattern in our subconscious, that inevitably affect the way we think and feel. These patterns are primarily imprinted in early childhood, and they determine our future character, personality and, ultimately, our behavior. The fear of rejection plays an enormous part in this process.

“We don’t die from rejection but it still feels like we will.” – Marisa Peer

Marisa demonstrates the power of self-dialogue and its effect on our mind through two very clever thought experiments. The Lemon Test, in which the listener is guided to visualize eating a lemon, which is inevitably followed by an increase in salivation.

“Your mind doesn’t care if what you tell it is right or wrong, good or bad, healthy or unhealthy. It just lets it in.” – Marisa Peer

The other experiment explores the direct link between negative self-talk and our physical strength. When we say bad things to ourselves and think destructive thoughts we become weak. But it also works in the opposite direction. The better our thoughts are, the stronger we will feel.

What is RRT and How Does It Work?

The main inspiration that has lead Marisa to develop Rapid Transformational Therapy came from a discrepancy between the fact that we live in a fast-track world, and that conventional therapy takes too long. RTT aims to determine the fundamental, underlying problem quickly, and resolve it within one or two therapy sessions. Using practical techniques based on hypnotherapy and self-dialogue, Marisa empowers her clients and gives them a practical way of rewiring their software and dealing with their issues.

Finally, Marisa emphasizes the importance of recognizing when you’re in trouble, polluted by fears that can cause all sorts of rationalizations. It is crucial to find strength at that moment, be mindful and talk yourself out of it.

“You’re allowed to make a mistake, you’re not allowed to beat yourself up and make yourself sick. Because you’re a human!” – Marisa Peer