Through Refugee Eyes with Abdulazez Dukhan 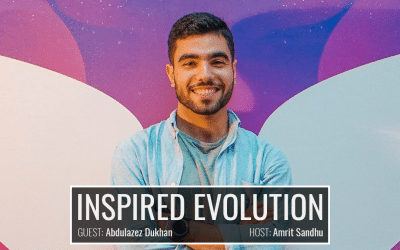 Our guest for this week is Abdulazez Dukhan, a digital artist, photographer, humanitarian, and creator of the ‘Through Refugee Eyes’ project.

Abdulazez grew up in Syria and was only 12 years old when the civil war started. Three years after, his family was forced to leave their home in search of safety and peace.

He first traveled to Turkey. Abdulazez started learning about Photoshop and digital art through tutorials on YouTube, which is also how he started learning English. But as time went by, the situation and the conditions for the refugees were becoming more and more difficult. In January of 2016, he moved to a refugee camp in Greece.

It is in Greece where he fully embraced the path of an artist. He received his first camera as a gift from one of the volunteers he collaborated with and he’s been involved with photography ever since.

In April 2016, he started an independent photography project called “Through Refugee Eyes” with a goal of providing Syrian refugees with a voice. He noticed that the media was spinning stories in order to portray the people who are fleeing war as hopeless, dangerous and ignorant. He realized that he needed to act upon this injustice and start documenting what truly happened inside refugee camps.

To this day, Abdulazez is hoping to spread the word about the true adversities people who are fleeing their war-torn homes are faced with every day. He is looking to share the message of respect, appreciation, and collaboration, hoping we can build a better future together, for everyone.

Abdulazez recently shared his story at the Mindvalley University in Croatia, 2019. You can check out his full talk here!

Abdulazez was only 12 when the protests in Syria started. These demonstrations grew out of the Arab Spring movement and they were sparked by an incident when several boys were arrested for writing the words “Freedom” on their school walls. These boys were around the same age as Abdulazez at the time.

Their arrest was supposed to be a strong message made by the Syrian government. Even though the stance of the general public was clear and everyone could feel the injustice, no apology was made. The government stood by the decision and their lack of remorse fueled the will of the people to stand and speak up.

At the time, Abdulazez was still in primary school. But instead of worrying about homework, he had to think about whether or not he is going to get home from school safe and sound.

We don’t often hear in the news about how the revolution looked in the early stages and Abdulazez recalls some of the memories from that period of his life. He remembers people shouting at those who were tasked with bringing down the demonstrations that “they are one and that there was no need for violence.”

“You can see a lot of footage where people were walking on the streets with olive branches.” – Abdulazez Dukhan

The domestic media started spinning stories in the news in order to portray the protests as acts of terror. As the situation became increasingly difficult, to a point when Abdulazez and his family had no choice but to seek safety away from their home.

“Giving up on your country is a hard thing to do. You only give up as a last resort.” – Abdulazez Dukhan

The first country he went to was Turkey and it was there where he started learning about digital art by watching tutorials on YouTube. He spontaneously started learning English in order to be able to explore new techniques.

Later on, he migrated to Greece and the move came with a completely new set of adversities. While staying at a refugee camp along with thousands of people, he got a camera as a gift from one of the volunteers. He’s been a photographer ever since, acquiring knowledge about the art form in any way he can.

“The knowledge I have today came from many photographers coming from all over the world.” – Abdulazez Dukhan

He currently resides in Belgium, still doing anything he can to break the stigma about Syrian refugees promoted in the media and provide them with a voice.

Abdulazez reflects on how adaptation was the number one tool that helped him handle adverse situations. He faced new challenges each day but he realized he had to take an active approach and try to make the most out of difficult conditions.

“We had hope. I had lots of hope but I knew hope won’t change my situation. I had to move. I had to do something. – Abdulazez Dukhan

Through adaptation, we can benefit others and not just ourselves. Abdulazez experienced this first hand. Even though his English wasn’t perfect, he did not shy away for helping others who were in need, desperately trying to get their message across.

“It was such a heartwarming feeling whenever people showed their gratitude for doing a good job translating. That pushed me to try and do more.” – Abdulazez Dukhan

Abdulazes was clearly fueled by the desire to help people. It seems as though each good deed provided him with the motivation and the fuel to continue his mission. We sometimes underestimate the effect our community can have on lifting our spirits, thus helping us become an even better version of ourselves.

“These people are doing all of this because they believe in me, so I have to believe in myself!” – Abdulazez Dukhan

The essence of Abdulazez’s efforts is to discredit the narrative that the refugees are people who want to disrupt other cultures and steal jobs. He is trying to share a message of appreciation and gratitude while also expressing an overall desire people have for being able to contribute and give back.

“We are there to respect their cultures because this is their culture, this is their country… I don’t have to give up my religion or my culture or my background. I’m the same person but I’m just thanking them for what they are giving me.” – Abdulazez Dukhan

I am so grateful that I was able to have this conversation and meet Abdulazez. His story is incredible, his art is breathtaking, and his motivations are pure. I truly admire how he was able to overcome adversity and still be able to find a place for beauty and art. Striving towards peace and acceptance, fueled by love, communicating through the language of art. You inspire us all.