You Are Loved with Adam Roa 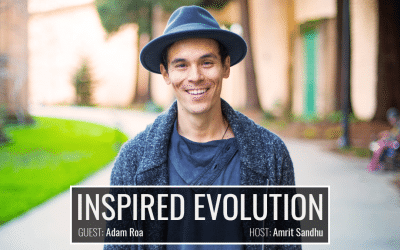 Adam’s educational background is a Magna Cum Laude marketing degree from Arizona State University. In 2015, he started a coaching business in the face of adversity. Having no steady income, he left the place he’d been calling home for 7 years and decided to travel the world because his intuition told him to do so. Along came amazing experiences including a 10-day silent meditation retreat in India, building clean-water wells in Tanzania and volunteering at a refugee camp in Greece. Even though he was traveling all over the world, he managed to build a successful business based on transmitting frequency to others who need support in taking a leap of faith and empowering them to become the infinite creators they are.

In 2016, while traveling in Bali, he had an idea about creating a podcast. He is currently hosting ‘The Deep Dive Podcast’ with a goal of providing an authentic glimpse into the minds of today’s thought leaders and game changers. Adam is hoping to provide his listeners with an understanding that success and happiness are not about what you think, but how you think.

In 2018, he started producing his own YouTube show titled ‘The Art of Choosing Love’. It revolves around his explorational journey he embarked on with his friends (who are also helping him produce the show), after him and his girlfriend, Azrya Cohen, decided to consciously uncouple after 10 years of a loving relationship. He is on a quest to experience the world, create conscious content and achieve his dreams while living life to the fullest and having fun.

“I went through what I refer to as a ‘hollowing-out period’.” – Adam Roa

Sometime around 5 years ago, it all seemed like it was falling apart for Adam. He was undergoing a complete financial restructuring and trying to start his own business, but as if that weren’t stressful enough, he was involved in a major car accident which left him needing hip surgery with a side of intense migraines. The point where it all cracked was one week after the accident when he saw that his parked rental car had been totaled in a hit and run.

In the face of newfound adversity, Adam had to accept that he didn’t have things figured out as much as he’d previously thought. He proceeded to resolve his grueling situation through a series of steps including seeking help and taking action.

One of the actions he took was experimenting with Ayahuasca, an entheogenic brew used in traditional spiritual medicine in ceremonies among the indigenous peoples of the Amazon. The visual experience he had during the ritual became his awakening moment. It is a point at which everything shifted, which led him to accept and explore different areas of knowledge he previously found funny or didn’t take seriously. He became a believer because he had an experience which serves him as proof of a higher power and the interconnectedness of our universe.

“I have this classically conditioned evidence that my spiritual beliefs are actually effective at creating the life I want to lead.” – Adam Roa

“The reasons why people are drawn to my message is because I like to play in both realms and understand how it works because I think they’re the same thing.” – Adam Roa

Living through his very own awakening moment has opened up an entirely new world of wisdom and knowledge for Adam. But that doesn’t mean he has left his past beliefs behind, but rather that he discovered something that enriches them and is complementary to what he has known before.

He is diving deep into new topics each day, with his intuition leading the way. By connecting the scientific with the spiritual, he is taking the best out of both worlds and in result gaining a broader perspective with a rich system of interconnected constructs. It has allowed him to take things into his own hands and empowered him to become a creator of his own reality.

“At the end of the day, the reality we create is going to be based on what we believe to be true.” – Adam Roa

Need for a New Approach to Education: Living Your Dream

“Now you’re seeing this rise of entrepreneurial endeavors and startups and crypto and all these technologies that are supporting entrepreneurs and what we haven’t seen is a massive shift in the way that we’re educating.” – Adam Roa

Adam explores the concept of societal conditioning, to the point where our creative nature is being pushed back through educational systems put in place just so it would benefit the traditional understanding of work and economy. What has been happening in the past years and is being exhibited through the rise in small business ownership and personal brand development is that finally, people are becoming more and more empowered to live a life where they get to do fulfilling work while experiencing that they are making a significant impact. Adam points out that “the educational system was designed to fit into the corporate world” but there is an evergrowing need for stepping away from that mindset and inspire the future generations to dream. We’re dreamers by nature but we also have the power to live them.

“I don’t believe that you’re given a dream that you can’t accomplish. The fact that you’re even having it means that the possibility exists for you to create it.” – Adam Roa

“There’s enough people telling people, and the age of the guru on the mountain top – I just don’t buy into it anymore.” – Adam Roa

Adam owes the unpredictability of his journey to his intuition, but the personal growth and the transformation he’s going through is a direct consequence of him having the courage to open himself up for new experiences and take actions which are destined to take him closer to achieving his dreams. His message of inspired evolution is truly a message of love and his parting words are underlying what we need to imprint into our subconscious in order to set a foundation for achieving true happiness in life: