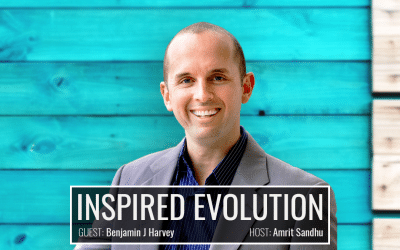 Our guest for this week is Benjamin J Harvey, a speaker, educator, coach and founder of Authentic Education.

Benjamin has been studying psychology for the past 20 years. On his journey to explore the intricacies of the human psyche, he has learned from and collaborated with different people of diverse vocation. From psychologists to scientists, to seers, to shamans, Benjamin has used their insights to develop a special approach for bringing change into people’s lives and helping them discover their Shadow Values. He is helping people across the globe discover their authentic message and achieve financial abundance all the while inspiring them to live their love.

He founded Authentic Education, an organization that offers business and development courses with a mission to create the largest group of world-class coaches, speakers, and online educators earning over 6 figures, by helping people live their love. Check out their website for a tone of free educational content from eBooks to motivational audio downloads!

“Everybody’s got a story, a hard-luck journey. Mine is no better than anybody else’s… When I was a young kid I went through some pretty intensive sexual abuse and that really, sort of… screwed my mind up quite a bit.” – Benjamin J Harvey

Benjamin is very open about his childhood traumas of being a victim of sexual abuse. These incidents have made a devastating mark on his psyche, one he has fought throughout his youth. By the age of 20, he was regularly visiting psychiatrists and psychologists, seeking help to try and recollect his fragmented mind. His struggles culminated with him being admitted into a psychiatric ward. The experience itself was traumatic but the stigma of mental illness is so strong that he cites feeling an enormous amount of shame and guilt at that time, related to being held in a mental institution and diagnosed as bipolar with a borderline personality disorder.

“Everyone’s wanting to live their love and to do what they love, but they don’t realize that what they truly love in life… has been given value by the traumas and the experiences they’ve been through.” – Benjamin J Harvey

For the next 5 and a half years of his life, Benjamin was severely medicated and struggling all-round. The real push and a defining moment that inspired the change came through a tragic event. One of his best friends from school had committed suicide and the news shook Benjamin to his very core. In the aftermath, he decided that he needed to take control of his own life and to take matters into his own hands. He gradually got off his medication all the while educating himself on meditation and personal transformation. The results of his efforts were astounding, embodied in the fact that he has been medication-free since 2002.

“When I finally got on track and started doing what I love it was the most remarkable thing. My brain was no longer sending me feedback. It no longer had to tell me that I’m not on purpose.” – Benjamin J Harvey

Benjamin discovered his love in the form of educating and coaching. He now shares his story without being riddled with shame and guilt but rather uses it as a tool to inspire and motivate others. He remembers he felt like the horrible things that happened to him were unique and that he was the only person struggling. By sharing his story, Benjamin is also making sure people who are suffering get a very important message – that they’re not alone.

The Complex Nature of Purpose

“It’s important that people realize that purpose is many things. Your purpose can be your love of swimming while you also enjoy your 1-on-1 coaching, but you also love reading a book… those many things will come in a hierarchy and you’ll work out that hierarchy eventually.” – Benjamin J Harvey

Benjamin has a very compelling version of how the process of finding our purpose actually works. He proposes the idea that our mind has a unique way of showing us what we’re born to do. Benjamin continues to infer that if we’re doing what we love our mind can relax. These activities that, as he puts it, “silence the mind”, are responding and in line with our values which means that by doing them we’re actually fulfilling our purpose. Through all of this, we can understand that he is offering a new take on the idea of “purpose” by making it synonymous with presence.

“If you observe the things that allow you to become present with no effort, you’ve found your purpose. And it can be 15 things that do that. If you find 15 things that make you present, just clear out your diary and just start doing those 15 things.” – Benjamin J Harvey

Money as a Transference of Love

We also dive deep into the social values and commentary regarding the ethics behind achieving financial abundance and success. Benjamin is disappointed by the hypocrisy of the situation where people are being told they should give up the pursuit of wealth by people who are themselves very wealthy. He argues that abundance is our birthright and that financial abundance is just another aspect of that. Benjamin’s relationship with money changed the moment he realized that it could be a tool that allowed him to express love while empowering him to have more freedom.

Ben’s personal story is a true inspiration. He is the living proof that your experiences don’t determine the person you’re going to become and that you have the power to change, take control of your life and prosper. His cause is noble and I particularly loved his method we can use for self-determining our purpose in life. We often struggle to find meaning and we’re insecure about whether we’ve made the right choices or not. His words offer comfort and guidance:

“Gravitate towards the things that silence your mind and you will have found your truth.” – Benjamin J Harvey