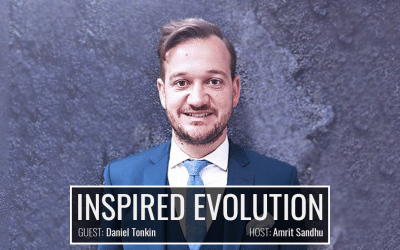 Our guest for this week is Daniel Tonkin, recruitment innovator, author, sales ninja, and current Director of Operations and Strategy Manager of Wow Recruitment Australia.

According to Daniel, the journey started way back in August 2008. That is when he got himself involved in the business of sales, marketing, and recruitment. In the past decade, he’s been working hard with a goal of perfecting his skills, having major success along the way. He attributes that success to a key ability he has developed – connecting talent to opportunity. In 2017, along with his partners, he set up a boutique recruitment agency specializing in sales, marketing, and corporate support called Wow Recruitment Australia. He plans to continue down the entrepreneurial route, with the hope of one day being able to share the skills and knowledge he’s acquired over the years, and embark on a new journey in the waters of coaching, consulting and mentorship.

Daniel has recently released his first book titled “Shit Happens! Then Rainbows” aiming to “slay procrastination forever”. He offers a fresh outlook and hard insight into the process of achieving your dreams and finding your personal rainbow.

“When you only see the clouds for a long period of time, sometimes you think the sun is never going to come out.” – Daniel Tonkin

In the midst of the global economic crises, a young old Daniel decided to pursue his entrepreneurial dreams no matter what. Armed with the enthusiasm of a 23-year old, he decided to embark on a journey that has been going strong for the last 10 years. Even though it might seem to you that his decision was rushed or not thought out properly, Daniel reveals that this naivety actually worked in his favor to some extent.

“Sometimes when you do too much research, you scare yourself out of trying.” – Daniel Tonkin

He points out his ability to take action as the crucial element of his success. Working every day and ticking off boxes one by one has allowed him to build momentum and create a progression that has led him to become the person he is today.

There have been a lot of ups and downs though. Daniel was not immune to the common missteps we tend to make in our lives, like focusing heavily on the past or our future, neglecting to live life in the moment. He used an interesting, unusually named method he learned from one of his mentors called “brain-dump”.

“I just started, literally, before I go to sleep… I just used to dump every single bit of shit of thoughts, positive and negative, onto a piece of paper.” – Daniel Tonkin

By writing down his thoughts, Daniel had a better overview and has created a much clearer context for understanding them. He was learning how to analyze the things that bothered him and deal with them in a very direct, rational manner. He was basically able to, in a way, convince himself why exactly he should not worry about these things, especially right before he’s supposed to go to sleep.

“When you’ve got a great idea, as soon as you write it down, it turns into a goal.” – Daniel Tonkin

There is something soothing in putting the pen to the paper. There is an old proverb, coming from the regions of Eastern Europe, that roughly translates to “a smart person writes things down, only a fool tries to remember”. Psychological studies suggest that writing things down or taking notes is a huge benefit for our memory because an idea is being coded in more than one way.

Daniel has taken full advantage of the simple, yet not so obvious technique of writing down his thoughts, goals, and even dreams. All of this has another component to it, which is trying to create an upbeat attitude and calling for different manifestations to arise. By keeping his thoughts in order, while looking to give them a positive twist, Daniel is looking to use the laws of attraction to his favor in both professional and personal life. It’s important to note that he accentuates taking action above everything else, noticing that without it, everything else you’re doing would be more or less pointless, or at least ineffective.

“I guess, all I really did was, take the concept of the law of attraction and how it actually worked and then added a layer of how I can take action on these different aspects.” – Daniel Tonkin

Daniel still has a lot more that he would like to accomplish before taking the next step in his career life. Still, the end game to his professional path is looking quite noble and it’s concentrated around the idea of “paying it forward”. Daniel is truly grateful for the opportunities he’s had of working with people who shared their knowledge selflessly and he’s hoping that one day he’ll be able to do the same. His book “Shit Happens! Then Rainbows” is the first step towards him sharing his experience with the world, hoping that it will lead people on a path to success.

Talking to Daniel was an absolute pleasure and his understanding of how important it is to take organized action is truly inspiring. The future seems very exciting for him and hopefully, he will be able to fulfill his dreams of giving back to the community. To that end, he leaves us with this motivational thought to inspire us on our own journey of evolution:

“You have to do you!… Be careful and don’t let people’s opinions or your own doubts stop you from moving forward!” – Daniel Tonkin