Dr. John Demartini on Self-Mastery: The Secret of Balance vs Growth 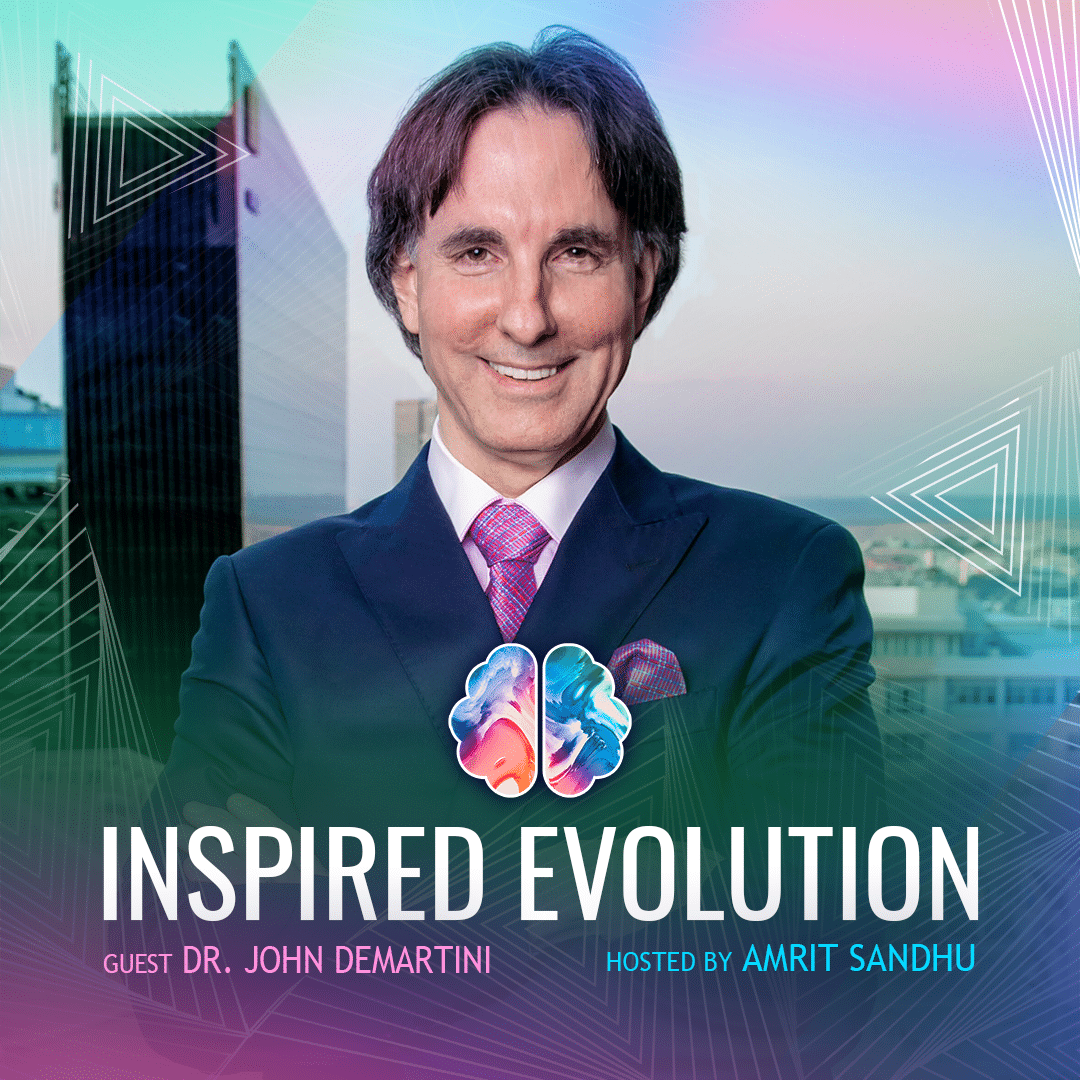 Our guest this week is Dr. John F. Demartini, a professional speaker, author, and business consultant.

Dr. Demartini is the founder of the Concourse of Wisdom School of Philosophy and Healing and the clients for his consulting business range from Wall Street financiers, financial planners, and corporate executives to health-care professionals, actors, and sports personalities. He began his career as a doctor of chiropractic and went on to explore more than 200 different disciplines in pursuit of what he calls Universal Principles of Life and Health. He is considered one of the leading authorities on human behaviour, leadership and business. He has presented along-side Sir Richard Branson, Donald Trump, Stephen Covey, Deepak Chopra, Wayne Dyer, Steve Wosniak and many others.

He has been a welcomed guest on Larry King Live, CNN, CNBC, is a contributor to Oprah Magazine and hundreds of other magazines, and featured in the international phenomena The Secret. He has been filmed and appeared in nearly 40 documentaries such The Opus, The Compass, Spirit 2 Power, Overfed and Under Nourished, Leap and Oh My God alongside celebrities such as Hugh Jackman, Seal, Ringo Star, David Copperfield and Bob Geldof, and is the author of 40 books published in 38 different languages.

He has produced over 75 CDs and DVDs and numerous online programs covering subjects such as personal development, relationships, wealth, education and business. You can find him at www.drdemartini.com and stay up to date with his stay inspired Facebook group( COVID-19 – Stay Inspired with Dr. Demartini) – https://www.facebook.com/groups/groupforvisionaries/

The laws of physics and chemistry have a very direct correlation with psychology. When we have a set of values in our lives that are unique to us, and we live in alignment congruently with what we value most, and we’re spontaneously inspired from within to act, and we’re disciplined, reliable, and focused, and we tend to walk our talk and expand our space and time horizons, and build momentum, and awaken our executive center, and awaken an inspired vision and strategically plan that vision and execute that vision with self-governance, we reach a state of objectivity that allows us to be soulful, full of unconditional love, with neutrality, and non-polarization. When we live by our lower values, the things we seek and avoid occupy space and time in our minds and add time and space which ages us entropically, but when we live by our highest values we extract out space and time from our minds and become present, and we achieve a timeless agelessness.

“A state of objectivity allows us to be soulful and full of unconditional love” – Dr. John Demartini

Whenever one lives by their highest values, they embrace challenges in the pursuit of a mission, and they fill their day with challenges that inspire them to have fulfillment, because when we live by our highest values we have fulfillment, and when we don’t we have emptiness. Solving human problems is the greatest problem we can solve on the earth, and so anything we can do to solve human challenges, problems, and voids, and help them fill those voids, solve those mysteries, solve those problems, and answer those questions is the highest pursuit the human being can do that gives the most fulfillment in life. At the level of the essence of our soul, we have nothing missing in our lives, but at the level of the existence of our senses, things appear to be missing and that’s where our problems originate. So any time we can solve that, that’s to our greatest advantage, and the most fulfillment.

“If you ask concise questions your life goes in a concise direction” – Dr. John Demartini

Immanuel Kant said that there is an imminent and transcendent self. One that dealt with phenomena of the senses and one that dealt with nomina, or what Plato would call the ideal forms of assault. Scientists have now put that into neurological terms as the amygdala and hind brain areas, and the forebrain/executive center Scientists now put them in neurological terms as the amygdala (hindbrain areas) and the forebrain (Executive center). Whenever we’re in our imminent mind (Amygdala), we seek support over challenge, we seek prey over predator, and we end up manifesting false positives as a survival mechanism. The amygdala accentuates subjective biases with false positives to accentuate a positive and a negative, and we polarise our emotions and chemistries. That causes an addiction to pleasure and pride, and the avoidance of pain and shame externally and internally, and one becomes vulnerable to those that sell the fantasy of the opium of the masses (Of pleasure without pain). In actual fact, maximum development and achievement occurs at the border of those two. If one gets prey without predator, they get glutinous and fat, and they don’t get fit. If one gets predator without prey, one starves and doesn’t get fit. But if one puts the two together, the predator keeps them eating just the right amount to keep them fit, but not too much. Living in our amygdala and our lowest values is what causes us to have an addiction to positive thinking because we’re uninspired by what we do, unobjective, not engaged, and we’re looking for immediate gratification to compensate for it because our space and time horizons are shrunk. Dr. Demartini will share how he gave up on positive thinking to embrace having a balanced mind more.

“When we’re living by our highest values, we don’t live to eat, we eat to live” – Dr. John Demartini

The instincts and impulses in our animal nature are epigenetic responses from subjectively stored data that we picked up from conception till today. So every time we perceive something, and we’re attracted to it, and we are conscious of the upsides and unconscious of the downsides, we polarize our perceptions with bias, and we have a false reality. That polarity of perception skews our reality and we have uncertainty. We always have our intuition telling us when something is not true so when someone has a perception about us that is polarized, we can tell if it’s not true. If someone tells us both the good and bad about us, we can accept it as true because we would have certainty derived from seeing both sides.

Impulse is a desire and yearning for the prey, and instinct is a desire to avoid the predator, and they are a positive feedback system which dramatizes and polarizes towards false positives to make sure one doesn’t get eaten and that they eat. Intuition is a neutralizing negative feedback system trying to find the downsides in the prey to calm down one’s impulse, and the upsides to the predator so one can calm down their instinct, so they can be present, because when one is present and they’re still, they’ll actually draw the animal to themselves and the other one will not bite. The second one is centered and they don’t have impulse and instinct, an intuition is the negative feedback system trying to homeostat them back in equilibrium. People who don’t govern over their impulse and instinct live with passion of an animal and those that know how to govern themselves with their intuition live with a mission as an angelic human.

“A human being can never have certainty unless they have objectivity” – Dr. John Demartini

He was born with a speech impediment and he had to wear strings and buttons in his mouth from age four and he had to go to a speech pathologist because he had problems with pronunciation and using his mouth properly. He also had his arm and leg turned in so he had to wear braces until he was four. When he got into first grade, he could not spell or read at all. His teacher told his parents that John wouldn’t be able to read, write, communicate, or amount to anything. He made it through elementary school by learning how to ask very smart kids questions, and he would make them feel better about themselves by asking what they had learned from the books they would read. He is known today for his skill of asking questions because of that. They moved to Richmond, Texas in a low socioeconomic area and the school he went to didn’t have very bright kids so he didn’t have anybody to ask questions which caused him to fail and drop out. He became a street kid and at 14 hitchhiked to California where he was still a street kid but eventually took up surfing which led him to Hawaii where he lived on the streets too. At age 17 he nearly died in the tent he used to live but a lady stranger saved him. The lady took him to a health food store where he met someone who encouraged him to take a yoga class which he did one night, and there was a special guest speaker whose message changed his life forever. From there he kept doing the affirmations that he was taught in every thing that he used to fail in and he ended up getting all the educational qualifications that he never thought he could achieve, and kept on achieving great milestones in life.

“A genius is one who listens to their inner vision and follows and obeys their inner voice” – Dr. John Demartini