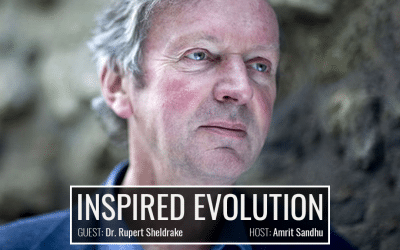 Our guest for this week is Dr. Rupert Sheldrake, a biologist, an international best-selling author, and the creator of the Morphic Resonance Hypothesis.

Dr. Rupert Sheldrake got his doctorate at the University of Cambridge in the field of biochemistry but has also studied philosophy and history at Harvard as part of his Frank Knox Fellowship. From then on he went to work as a Principal Plant Physiologist and Consultant Physiologist in India, at the Botany Department of the University of Malaya, Kuala Lumpur. He later engaged with extensive experimental research, studying unexplained subjects including telepathy and cases of peculiar animal behavior.

He’s credited with co-discovery of the mechanism of polar auxin transport but he’s probably the most well-known aspect of his work is the Morphic Resonance Hypothesis, which posits that “memory is inherent in nature” and we discuss it much further in the podcast. Some have labeled him “controversial” as he is speaking out about the many dogmas riddling the modern scientific approach and offers alternative views, which encompass many aspects of spiritual knowledge as well. You can find more on his thoughts about scientific dogmas in his book “The Science Delusion” also known by the title “Science Set Free” in the US.

In 2017 he released the book titled “Science and Spiritual Practices” which is one of the main topics of our conversation. In it, he explores the recent scientific studies that have confirmed the connection between spiritual practices on one hand and happiness and well-being on the other.

“Well, basically the Science Delusion is the belief that science already understands the nature of reality, in principle, leaving only the details to be filled in.” – Dr. Rupert Sheldrake

We dive deep into our discussion starting off with his criticism of modern science and its approach. Dr. Sheldrake argues that scientific dogmas are so deeply integrated into our education which and are largely represented by the philosophy of mechanistic materialism, making it a default starting point for most graduates. The idea that nature and all of its subsequent products operate like a machine, made out of specific parts and compartments with a clear and distinct function. Dr. Sheldrake recognizes this as a metaphor that has seeped into and taken over the scientific narrative. He proposes a different metaphor which he believes is a more apt description of our world.

“It’s actually much more appropriate to think of nature as an organism, as alive. The whole universe is like a developing organism. It starts small with the Big Bang, a bit like the hatching of the cosmic egg. It’s been growing and expanding ever since.” – Dr. Rupert Sheldrake

Another scientific dogma that he points towards is the notion that purposeless of nature which is one of the products of the “machine metaphor”. He finds this worldview particularly depressing because it leads people on the path of secluding themselves from different aspects of life which they label as pointless, like for instance spiritual practices which is something that we’ve discussed later on.

Just a small disclaimer here. If you haven’t realized so far, Dr. Sheldrake’s is an experienced scientist with an impressively broad educational background. This description would need to be verbatim in order to truly give it justice. I urge you to listen to the podcast in order to get the full impression of our conversation as it’s intended.

In this section of our conversation, Dr. Sheldrake connects the notion of a higher consciousness present in all religions and elaborates the data which shows that religious and spiritual practices are connected with higher levels of happiness, health, and overall well-being. He cleverly acknowledges that the so-called “new atheists” have not been immune to the effectiveness of these practices which is why many of their more popular representatives are getting involved with yoga and meditation. He also acknowledges atheistic intepretations of spiritual practices and the physiological changes they cause. As a response, he questions whether these interpretations are a valid argument for suggesting that these experiences are nothing but changes in the chemical release of the brain. However, he is very optimistic that we’re in for an era of amazing discoveries in the field of spirituality.

“I think that we’re actually on the threshold of a new phase in spiritual evolution because it’s possible to do these practices within religious traditions and also on the scientific front, who prefers that. So this is a completely new situation that we’re in.” – Dr. Rupert Sheldrake

“Morphic Resonance is really an idea about memory in nature… This memory means that information is carried from past to present across space and time based on similarity.” – Dr. Rupert Sheldrake

In this part of our conversation, Dr. Sheldrake guides us through his idea of Morphic Resonance. We talk about the understanding of how “evolution is an interplay between creativity and habit” and the subsequent conclusions drawn along those lines of thought. He points out that some parts of the habitual aspect of our existence have been present for billions of years but that the possibility for creativity is what breaks the cycle of calculable predictability. This “freedom” as he defines it is present in not only in ourselves but in all of nature.

We proceed to explore the interconnectedness of everything and Dr. Sheldrake evokes one of the greatest insights from the Rishi tradition in India.

Talking to Dr. Robert Sheldrake has been an utterly deep intellectual roller coaster full of glimpses into many alternative approaches to comprehending and exploring the world around us. His works provide an abundance of food for thought, so much so that it’s hard to pinpoint one, summarizing the message. I’ll have to go for the one that seems most inclusive and reflects his intentions to both remove the veil of scientific dogmas while also embracing the most valuable from both worlds of science and spirituality.

“There may be many levels and kinds of consciousness beyond our own.” – Dr. Rupert Sheldrake