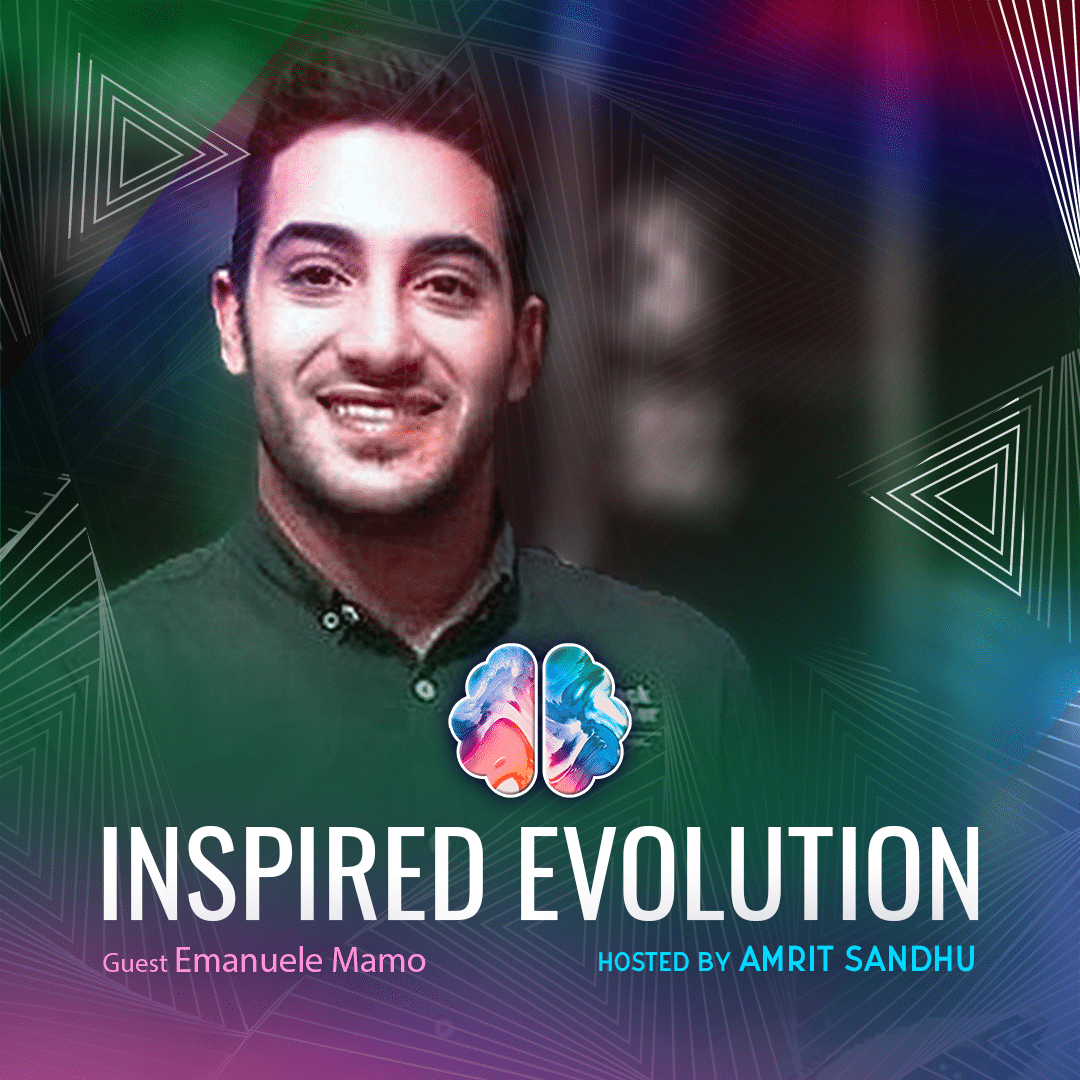 Our guest this week is Emanuele Mamo, the founder of 3i Black Water, and an incredible musician (Part of the band, “Acaxia”)

In an endeavor to better his health, he started consuming fulvic acid (which is found in the most healthy soils around the world) to remove heavy metals and toxins from his body, and it attracted the attention of his friends. One of his friends saw an opportunity in the black beverage and realizing that no other company was selling such a beverage, they started 3i Black Water. Their unique fulvic trace mineral blend promotes gut health, cell hydration, nutrition absorption rates, and assists with maintaining an alkaline diet. That makes 3i Black Water like no other functional beverage on the market. They use 100% rainwater that is distilled (evaporated) which strips all the nasty chemicals like fluoride and chlorine that are normally found in tap water, and then they combine that with their 100% natural fulvic trace mineral blend.

Emanuele has taught for more than 15 years at VAS in all areas of vocal, performance training, songwriting, and music production. He is a multi-skilled performer with strong vocal and instrumental ability and has toured across Australia and America with various corporate acts, as well as worked on his own material showcasing RnB and Dance Music with well known Australian producers. He was the very first person in Australia to sit the Grade 8 Music Production exam through RSL Awards in London and has supported many well known local and international artists as well as being a headline act at clubs, festivals, and corporate events.

Manny, as he is popularly referred to, is the lead singer of the band “Allegro”, winner of the ABIA Award for Best Live Entertainment in Victoria, and part of the award-winning cabaret act “The Viva Italia Show” which has toured internationally. He has been signed to a major Record Label and 2 of his songs have had ARIA Top 10 Chart Success. “Beside You” in 2010 and Accidents Happen in 2011. ​Continued chart success in 2012, saw his remix of Sarah McLeod break ARIA Top 5.

He signed a new Record Deal in 2017 and has released a new EP under the name “Acaxia” which is an electronic music project and the first single was developed after he spent time with Indigenous students and musicians in Darwin in 2017. It was also a Top 30 Finalist at the ASA Awards in 2018. In 2017 Manny was one of only 8 nominees across the country for the prestigious Rudy Brandsma Songwriting Award at the Australian Songwriters Association annual awards

The success of Manny’s teaching skills is evident in his Past and Current Student success, who are now working professionally around the world in the industry. ​He was a recent winner of the Moonee Valley Foundation award and the 2018 winner of the Hume City Council Arts Award. Manny was also the winner of the VAS Teacher of the Year in 2018 and inducted into the VAS Hall of Fame in 2019.

It’s found in healthy soils, but most of it is present in the fifth layer (humus layer) of the earth. They source their fulvic acid from a 32.5 Million year old ocean bed that had been underground for all those years. There are tons of minerals trapped under that ocean bed and 3i Black Water takes the raw materials that they source from there, and run them through a reverse osmosis process which ensures that no chemicals touch their product in any way. Only water touches the product to extract the fulvic minerals.

“No chemicals end up touching our product whatsoever” – Emanuele Mamo

He needed to change his diet and was struggling with it, so a friend suggested that he find something that he could use to detox. That’s how he accidentally came across fulvic acid.

Music is his full-time job and his business partner in 3i Black Water, Christian, was a DJ for many years. They’ve known each other for 12 years and have made great music together, which is how they ended up in the same band. Christian had some previous experience working in a beverage company which made it very convenient to partner with him.

With the way 3i came to be, he sees a lot of divine timing from the way he and his partners came together to start the company just when he had started using the fulvic acid in his diet. He highlights the importance of people acknowledging the divine intervention and synchronicities that bring things together for their own good.

Emanuele and his partners have a deep respect for each other. They respect each other’s strengths and weaknesses, and they’re very open with each other. None of them brings any ego into their relationship and they never really have any conflicts. Emanuele feels their prior friendship played a huge role in helping them start and successfully run 3i Black Water. Each of their individual contributions to the management of the company has been instrumental in its success. Andrew is the rock and pillar of the company with business management expertise, Emanuele brings the much-needed creativity, and Christian brings in creativity and a lot of sales experience specifically in the beverage industry.

“Us being friends, to begin with really helped” – Emanuele Mamo

Creativity is Emanuele’s connection to something more than just what he can see or feel. It’s also a legacy that he can leave to the world forever. He’s always inspired to express himself through music no matter the situation he’s going through, good or bad. He loves that sharing with the world through his music touches people’s lives positively. He believes that being creative is one of the most powerful gifts of consciousness we have as human beings. It has helped him learn how to love himself and build a great relationship with himself.

“When my body is not here, my creations could still be here” – Emanuele Mamo

He compares leaving a legacy to the innate urge that we have to reproduce, have kids, and leave our genes and DNA behind. It can be in the form of a memory or an imprint of what someone will have done with their life. With music for example, when someone creates music it can be heard 100 years after they pass away and still evoke the emotions that the singer intended to evoke in people when they created the music, which in a way brings the singer back to life.

“Just through those vibrations of my music again, I’m alive again” – Emanuele Mamo

Emanuele believes that we should all have a little bit more appreciation for the time that we have here being conscious. His mantra sits on the idea that death is just “The next journey” and a transition. While nobody knows what happens after death, we must all accept that it will happen to all of us, and embrace it as part of life. The uncertainty around it though, makes it hard for people to celebrate it.

“Death is just the next journey” – Emanuele Mamo

Spending time with the indigenous people of Australia and sharing with them on a creativity level was a great experience for Emanuele. He also loved helping some of their kids experiment with being creative through song and dance. It was heartbreaking for him to see the kind of third-world type of life they lead. Learning to play some of their musical instruments was great too, and he incorporated some of them into their music. He also wrote music with them.