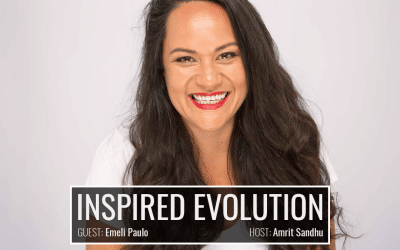 Our guest for this week is Emeli Paulo, purpose coach, wellbeing activist and founder of Collective Potential.

In the last 20 years, Emeli has been working hard on helping people unleash their full potential. She has developed unique internal processes in order to unmask the best version of herself and she will teach you how to apply them to your situation as well. Emeli founded Collective Potential and their main goal is preventative mental health. Her organization allows people to discover their agency and provides them with a supportive community.

Her work has been supported by spiritual and business icons such as Oprah Winfrey, Sir Richard Branson, Russell Brand, and Dalai Lama! They have encouraged her and gave her the confidence to create Australia’s first united wellbeing movement. Throughout her career, Emeli had the opportunity to work with around 300 000 clients, helping them discover their purpose in life. She was also involved in the organization of over 10 000 workshops, seminars and special events where she had an opportunity to address people directly and across the globe. On her long list of specialties, we can find skills such as professional speaking, presentation skills facilitation skills, team building, culture change and transformation, leadership development.

The event that inspired Emeli to become what she is today was so dramatic that it sounds like something taken from a plot of a Hollywood movie. She was unsuspectingly standing on the street corner when she saw a young woman throw herself in front of a moving car. Luckily, the driver somehow managed to hit the breaks just in time. As Emeli approached her to provide comfort and attempt to calm her down, she learned that the young woman in the street was actually a victim of domestic abuse. She has been driven to the end of her rope, with no one to turn too. Emeli empathized with this woman’s story and she provided her with support when the health and justice system would not. She gave her a place to stay and was there for her in her time of need.

As years went by the woman was able to get her life on track and she is confident Emeli played a crucial role in her recovery. From this experience, Emeli discovered her calling and went into the business of purpose coaching with a strong focus on preventative mental health.

Emeli is no stranger to adversity. She had lost both of her parents in her youth and sought comfort in the use of drugs. But recreational use slowly but surely masked the problem of addiction she was struggling with.

“I had some major addictions in my life… It’s taken me years to pull myself out of the addictions that I’ve had around drug taking and alcoholism.” – Emeli Paulo

She was in a bad place but someone saw potential and put their trust in her the way she will go on to do for many. Jim Stynes was a famous AFL footballer and he was the first and only non-Australian-born player to win the Brownlow Medal. After his career in sports, he made his way into philanthropy by co-founding The Reach Foundation which is a youth not-for-profit organization. It was also the place where Emeli developed her skills as an experiential facilitator trainer.

Jim Stynes passed away after a struggle with cancer and his death hit Emeli hard along with the rest of the team. However, she knew it was up to her to continue his work and give support to those who need it most.

“When he passed away, I knew that I had to continue his work and his legacy to young people.” – Emeli Paulo

In her eventful career, she has worked with hundreds of thousands of people but she has also inspired a whole movement of those who are willing to make a difference and help others the same way she is and has been.

“I’ve trained over 2000 facilitators in experiential and some people are innate in it and others say I can’t do what you’re doing but you can train into that space.” – Emeli Paulo

The Value of Preventative Mental Health

“We have an epidemic and I really believe that I can speak the truth to the powers at be after a recent experience that I’ve had because I just think that what you’re doing with Inspired Evolution is saving lives.” – Emeli Paulo

This powerful testimonial that Emeli has made about Inspired Evolution is both humbling but also speaking to the point of the alignment in our goals. Collective potential deals in preventative mental health in many different ways and Emeli provides us with insight into the international work she has performed over the years. By helping people find their “why” and discover their true purpose while providing them with the tools and empowering them to strive towards it, Emeli has managed to create a wave of wellbeing both domestically and internationally. The positive effects can’t be statistically represented in a way that would do justice to the work she’s doing.

“You can’t know, you can not measure the preventative mental health.” – Emeli Paulo

Talking to Emeli was such a blessing and the work that she’s done over the years is a massive inspiration. It’s especially lovely how her warmth and kindness are being communicated with ease and when you combine that with her ability to build the momentum around her ideas you can’t be surprised by the huge amount of success she’s had. In the fight for preserving our mental health, she is on the front lines battling each day and bringing in amazing victories. She is very empowered, seeking to empower others and that is reflected in her message of Inspired Evolution:

“You have the power to choose how you want your future to be.” – Emeli Paulo