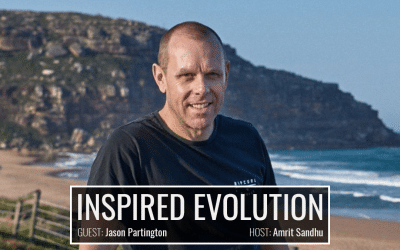 Our guest for this week is Jason Partington, entrepreneur, meditation promoter and coach, and founder of Meditation for Men, a brand of meditation courses which has a goal of fighting depression and promoting mental health among men.

Jason has had a very diverse career, with experience in both executive positions which include team management and business development, as well as in consultancy work, advising, educating and mentoring professionals in order to help them achieve business success. His career started in health and sports management and later on shifted into sales. He has attained leadership roles in several progressive Australian and international companies and more recently, as an owner of Residential Projects Australia, a respected and fast growing Property Investment Company. He has worked all over the world in places like French Polynesia, Indonesia, Maldives, Mexico, United Kingdom, Dubai, and India.

About 20 years ago, Jason was dealing with a difficult situation involving alcohol abuse and other self-destructive behaviors. In a state of depression, a friend recommended he should try meditation and Jason never looked back. From that point on, meditation has put Jason on the path of love, peace, and happiness.

Having witnessed an event which had suicide and depression rates in Australian men as the main topic, Jason felt inspired to contribute to the cause and share his experiences of meditation with the world. He founded ‘Meditation for Men’ which offers meditation courses in every major capital city across Australia. The 4-week courses are centered around learning the skill of meditation but they also provide an opportunity for men to discuss many challenges and barriers that they face every day.

Spreading the word about meditation and the benefits it can bring to our mental health has become Jason’s mission in life. He has developed a 6-week training program called ‘Evolve’ which is designed to help you reconnect with your authentic self.

At the age of 28, Jason was working a job which allowed him to travel the world. Yet he felt lost, unable to find and connect with his true self. Throughout this period he developed bad habits that included alcohol abuse among other things. The deep unhappiness he felt pushed him towards the verge of an existential crisis and put him in a situation of having to ask himself very difficult questions, while desperately fighting an ongoing battle with depression.

“I guess you could say I hit rock bottom. Like I really bottomed out.” – Jason Partington

At his lowest and among all the darkness, a friendly hand pulled him upward, guiding him on the path of meditation. Beata Alfoldi, who we’ve had the pleasure of interviewing on our podcast, has given him a pamflet about a meditation course. From that moment on, slowly but surely, Jason found his way back to a place of happiness, love, and peace, eager to share the gift and break the mystical barrier that surrounds the concept of meditation.

“I literally changed as a person in 6 weeks. In 6 weeks I was going on one path and all of a sudden decided I’m going on that path over there. And that started the journey, that started everything. It changed my entire life.” – Jason Partington

By practicing meditation, Jason learned to bring silence to his life, which in return allowed him to uncover his true nature. From a place of being ruined by a dominant and often self-destructive Ego to a new era of life where he learned to let go and start a dialogue with his true self.

“It’s this separating of the Ego from this actual, true identity. The more I meditate, the more naturally that true identity just permeates and becomes the person that controls it.” – Jason Partington

The Relationship Between Mindfulness and Meditation

Mindfulness is one of the most valuable skills we can develop as it is directly connected to having a mentally healthier, fuller and spiritually richer life. The pursuit of mindfulness is often misunderstood as something that needs to be chased. But it’s interesting to consider that bringing yourself to be mindful is not the only way to increase your capacity for mindfulness and as Jason profoundly puts it, it can be quite intense and exhausting. He believes that mindfulness and meditation are connected and that one should encourage and enable the other. By practicing meditation on a regular basis, we’re actually developing mindfulness as sort of a side-effect, without all the intensity and the pressure that comes with planned and organized training.

“When you meditate and you do your meditation twice a day, mindfulness comes as a natural course and part of your doing your meditation.” – Jason Partington

“I’ve always wanted to deliver a meditation-styled teaching that was not so religious-based and something that I felt could be more mainstream. The first reason behind that is because I want to pass that on to my children. – Jason Partington

Jason’s love for meditation is apparent and justified and his mission of spreading the word is nothing more than the story of a person trying to pass on a precious gift they have been blessed to receive. However, on his road to making meditation more accessible to everyone, he found that people are often turned away by the stereotypical representation of meditation, as something practiced only in a religious if not ascetic context. He shares a story of being present at an event that discussed suicide and depression among men and how he was shocked to find out that about a third of a 300-men audience has experienced suicidal thoughts. Jason is positive that meditation could be used as a tool for achieving and maintaining good mental health, but in order to make it more accessible, it needs to be popularized in a way that resonates with people living in the modern day western world.

Jason’s journey is an inspiration, not only because it shows that there is a way back from the darkness but because he is determined to lift others as well. He is doing so by spreading the word about meditation with the goal of making it more mainstream. If you’ve ever wondered what are the benefits of meditation, look no further than this wonderful, anecdotal description Jason shared about his personal experience:

“When you meditate you get these feelings you want to give. You want to give to someone other than yourself. You just want to give and you can’t help but have this compassion come through you.” – Jason Partington