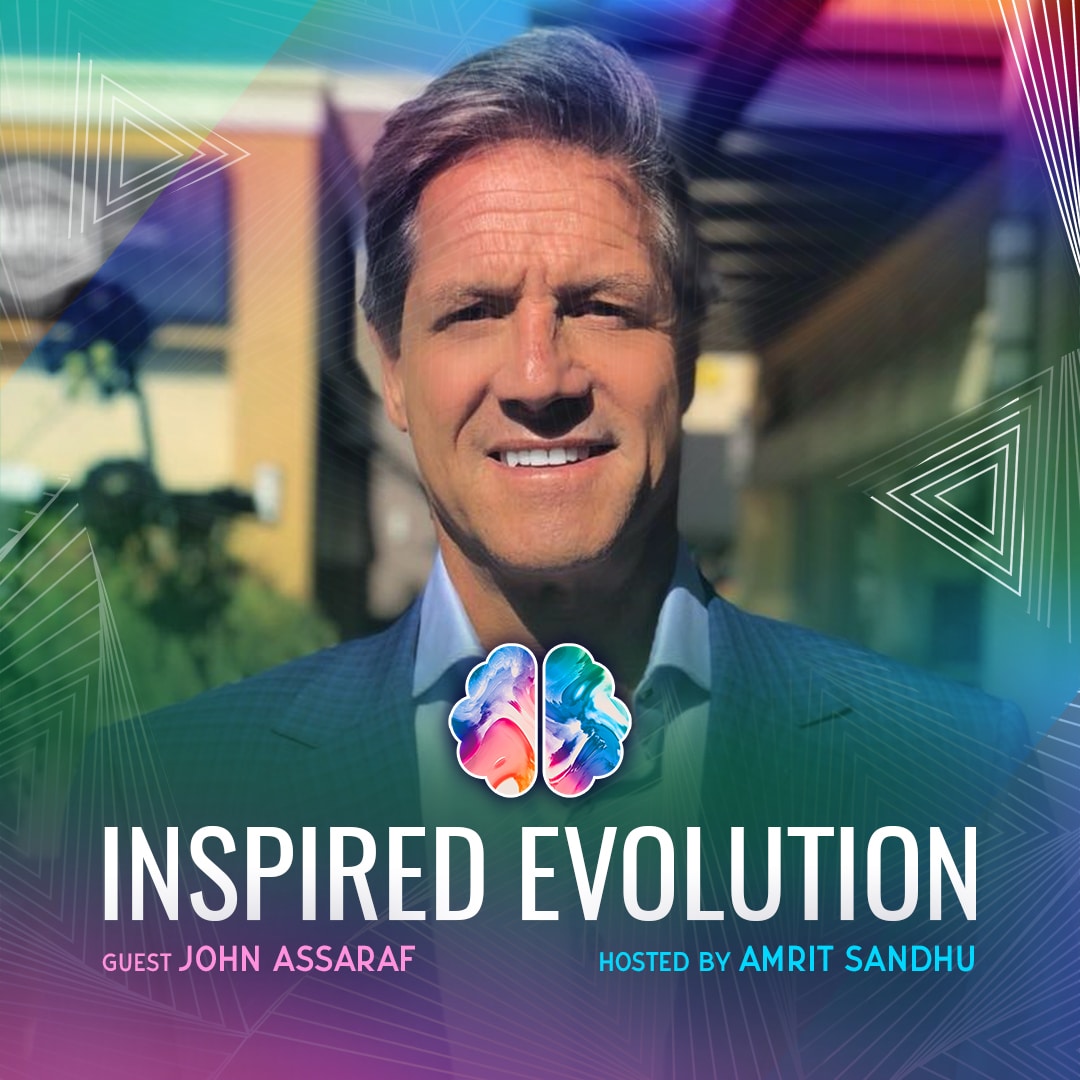 John’s latest bestselling book “Innercise: The New Science to Unlock Your Brain’s Hidden Power” helps you recognize and release the mental and emotional blocks that prevent you from achieving your life’s biggest goals and dreams.

If you would like to have mental and emotional techniques to strengthen your mindset and unleash the hidden power of your brain, you can get a copy Innercise here.

Amrit and John dive deep into how thoughts lead to behaviour that generates results,   and John’s neural reconditioning process and “innercises” you can start doing TODAY to change your habitual subconscious patterns and disempowering emotions that are holding you back from thriving personally, professionally and financially.

When John Assaraf built his first real estate company at the age of twenty six, something was holding his agents back. Although they were making fortunes in sales, something was preventing them from making more. Despite training and upgrading their knowledge, they kept stuck.

John discovered that once they became conditioned to earning a certain amount, they were repeating the same pattern over and over again keeping them stuck in their comfort zone.

Through research John found out we become conditioned to certain ways and then repeat the patterns, as part of our brains’ way to conserve energy and keep us in our comfort zone.

He needed to uncover what would break his agents free from this conditioning. And that was what a mentor did with him in his early twenties.

This coach not only helped him upgrade his knowledge and skills but trained his brain to develop the necessary beliefs to achieve his goals. He worked on upgrading his self inner, self worth and self esteem, and on how to manage his emotions of doubt, fear and uncertainty. They did “innercises” to upgrade his capacity as he upgraded his skills.

So, John took 75 agents from the 1200, and coached them everyday for six months to upgrade their mindset to match the skill set. Over six months they increased in sales by one hundred million dollars more than they normally did.

John proved that if you work on the inner game, you can affect the outer game.

The lack of knowledge or skill doesn’t hold you back from reaching your fullest potential. It is your mindset, emotional blocks, and deeply ingrained habits that you must get rid of to clear the path towards victory and living the life of your dreams.

Limiting beliefs, traumas and excuses are reinforced subconscious patterns that cause you to think, feel, and consistently behave in ways that produce the same results again and again.

And there are several ways to disrupt patterns and create better ones.

In this chapter John shares a couple of innercises to strengthen your mind when you are in a state of procrastination, doubt, anxiety or stress. The first one is a powerful breathing exercise and the second one is called A.I.A, used to reprogram your operating system through awareness, intention, and action, one simple and small action.

These two innercises help you take control over your brain. Being aware of the pattern, interrupting it, and choosing what you want versus what you don’t, will make you evolve. Then, if you do that over a long period of time, you will have a new dominant pattern and your old one will start to disappear.

“What is the minimum that you can commit to doing that you will stick to for one hundred days?”

John Assaraf is one of the leading mindset and behavioral experts in the world who has appeared numerous times on Larry King Live, Anderson Cooper and The Ellen DeGeneres Show.

His latest bestselling book Innercise: The Proven Science to Unleash Your Brain’s Hidden Power, helps individuals recognize and release the mental and emotional blocks that prevent them from achieving their fullest potential.

John has built 5 multimillion-dollar companies including taking one public on NASDAQ and growing Re/Max of Indiana to 1200 sales associates and $4.5 billion a year in sales.

He has written 2 New York Times Bestselling books that have been translated to 35 languages and has been featured in 10 movies, including the blockbuster hit “The Secret” and “Quest For Success” with Richard Branson and the Dalai Lama.

Today, he is the founder and CEO of NeuroGym, a company dedicated to using the most advanced technologies and evidence-based brain training methods to help individuals strengthen their mindset and emotional skills, so they achieve their goals faster and easier than ever before.

A couple of movies John was featured in:

Training people and the results not the same for everybody: (07:02)

Fear holding people back from success:(19:08)

About self image disconnections:(25:48)

The lack of knowledge and skills holding people back:(27:42)

The process of disrupting patterns and creating better ones:(32:35)

How long does it take to intrench a new behavioural pattern?:(41:46)

The importance of affirmations:(46:52)