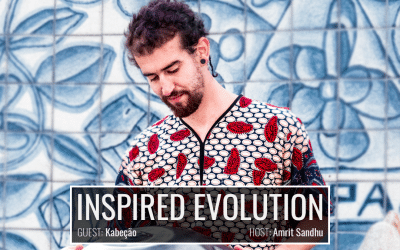 Our guest for this week is Carlos Rodrigues aka Kabeção, a Portuguese multi-instrumentalist, composer, street busker and sound healer who creates his own unique approach to music and sound.

Originally studying to become a surgeon, Carlos discovered another, more fulfilling way of bringing joy and happiness to people. As he got more and more involved with music, he began to discover, explore and experiment with many different musical instruments. From a young age, he was familiar with percussion and rhythm, and then as the years went by he started to add other types of instruments, from strings to woodwinds, and his focus comes from the simple exploration of sound.

Under the pseudonym Kabeção, the origin and the meaning of which he explains in our podcast, he embarked on a journey of a professional musician. He is self-taught and has combined influences from different parts of the world, Africa, India, Brazil, Turkey, Spain, France, Australia. He has developed unique playing techniques on each of his instruments, including drums, darbuka, udu, tabla, djembe, frame drum, cajon, berimbau, bansuri, sansula, Tibetan bowls, gongs, didgeridoo, guitar, and handpan.

In 2015, he was a finalist on Portugal’s “Got Talent” and you can see one of his breathtaking live performances here!

He has produced several albums throughout his career. His latest one titled “Touching Souls” was released in September 2017 after being completely crowd-funded by music lovers and players from all around the world. About the album, Carlos has stated that it exceeded expectations and goals during its conception and the album holds true to its name.

At a very early age, Carlos realized a deep desire to help others. He decided to study medicine, as he found that becoming a surgeon would be a very effective way of satisfying that desire and save lives in the process. While struggling with a few exams which proved to be challenging, he discovered a much more meaningful, engaging and fulfilling relationship with music. He decided to quit school and started teaching himself to play. As years went by and as he started sharing his music with the world, he came to the conclusion that there was an alternative way of bringing people joy.

As he further explored this emotional aspect of music and playing music, he focused more and more on this healing aspect of it, all the while trying to hit the right vibrations with his creations which will resonate with the listeners.

One of the main and recurring themes of our conversation is emotions and the different ways that they are included in the process of creating, producing and receiving music. Discovering the handpan was of tremendous significance for Kabeção. Not only did it evoke interest, invite him to experiment and ultimately find his sound, but he saw a great opportunity to reflect, grow and connect with the self.

“I felt really curious and since I’ve started playing I immediately felt connected with my soul… That was the first step for me to understand who I am. Who I am with other people, who I am with myself.” – Kabeção

Connecting with the idea of healing through music, Kabeção explores different ways in which this can be achieved and which key factors play a role. The attitude and the style of the person playing will influence the message and color the sounds being played, shaping the message further and enrich the melodies with emotion. He recalls a moment during one of his classes when he was brought to tears by a playing session from a girl that was still having difficulties with developing certain techniques. Her emotional connectedness to the music was very powerful and it overshadowed the objective lack of experience.

“Sound is vibration and depending on who is making the things vibrate and how you’re vibrating, that reflects on the sound.” – Kabeção

There are many different ways to evoke change and healing in a person with music. The intent behind music can be love, but it can also be an array of different emotions. Kabeção reflects on the ways tense and distorted sounds can cause people to have parts of them deconstruct, but more importantly to invite them to come together properly the second time around.

The listener also plays a key role in terms of effectiveness of music as a transformational and healing tool. There needs to be a certain amount of receptivity present in the mind of the listener. If we are open and in the mood to receive the message being told through the music there is a bigger chance we can gain more from the whole experience.

Breathing and the Creative Process

Creativity is a complex process and our ability to express it depends on a certain mindset. Kabeção points out breathing as a useful tool for getting yourself into a creative state. Different instruments demand different levels of physical activity but mastering any of them requires practice and discipline. By breathing and focusing on the breath, we can become more mindful and connect with ourselves. According to Kabeção, that connection with the self is very useful when it comes to creating and composing music.

“The more you breathe the more you bring yourself to you again, more creative you are… and more rooted you are to just be you… to just have fun.” – Kabeção

The Power of Listening

“I really believe that listening is one of the most powerful tools to heal this planet today.” – Kabeção

Being an experienced musician, it doesn’t come as a surprise that Kabeção emphasizes the importance of listening. Giving the circumstances of today’s fast-paced life, we tend to overlook the basic things. The way we communicate nowadays has become awkward and to some extent automatized, devoid of emotion, empathy and caring for the interlocutor. It seems as though we’re consistently oversaturating ourselves with information, but we are paying the price by not being able to focus, listen for a moment, open up and connect with others. Kabeção sees the great potential of healing through better conversation, and the foundation for those conversations is better listening.

“Challenge yourself to listen, even more… Sometimes you don’t have to say anything. You just need to listen.” – Kabeção