Live your Dream: Find Salvation through Imagination with Koky Saly 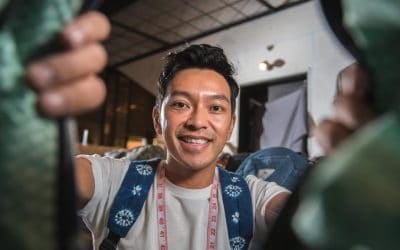 In this episode of Inspired Evolution, we welcome inspirationally imaginative-creative Koky Saly. A Brother, A Promise-Keeper and Founder of The Beekeeper Parade (a business founded to inspire change) and soon to be Author, he also founded a charity in Cambodia called BabyTree Projects which is responsible for establishing multiple schools in Cambodia which are now supported by Koky’s Beekeeper Parade business endeavor. Koky is a fellow Student of Life. The Beekeeper Parade is a social enterprise that upcycles textile waste by re-creating it into beautiful backpacks and bags. Through the sale of every backpack, a child in Cambodia is given access to quality education in one of the 5 schools he has set up.

He shares deeply his four fundamental observations that define him and have enabled him to find happiness (transcending his tribulations).
1.  Imagination.
2. Superpowers: (Believing you can change the world through kindness and the courage of taking massive action driven by that belief).
3. Fearlessness (and true courage).
4. Promises.

Woven throughout this conversation we also explore Kindness, Courage, Integrity, and Perseverance without complaint.

BeeKeeper Parade was created to help Koky fund the education of children attending the five schools he had already built in Cambodia through a charity organization he set-up in 2007 called BabyTree Projects. Initially, it was called Boy & Bee. It was about a 10 year old boy who thought he could change the world. But learned that he couldn’t until he worked with his best friend the Bee (which was his sister’s role). It was about friendship, teamwork and an unwavering belief in yourself.

The name was changed to BeeKeeper after his sister passed away from cancer. She left him her car in her will, with instructions to sell it and use the proceeds to make sure that the business Boy & Bee would be created, and inspire change in the world. Coping with the loss of his sister and the grief and depression that came with it has been his greatest challenge.

That boy in the original project didn’t exist anymore. He had changed. In the last months of his sister’s life, he spent every day at the hospital helping take care of her. He felt like he was her carer and her keeper. Since she was the Bee in the original title and he now was her keeper, he changed the title to BeeKeeper.

Even though they are currently focused on products, BeeKeeper is not limited to anything but Imagination which Koky shares deeply upon in this episode of the Inspired Evolution. They have created backpacks, but also an event called The Great Tuk Tuk Rally. He’s also in the middle of finalizing his novel. The common thread through all of these projects is that they are meant to inspire change in the world.

Koky started his business with his heart and soul. He made a promise to himself that I would make this project happen. And he continues to honor that promise. Being an intent Promise Keeper – Promises are another very deep conversation that we explore in this episode of the Inspired Evolution.

Koky reminds us to listen to our inner wisdom and the innate calling of your own self “That the one voice you should listen to above anyone else is your own.”

This conversation is extremely valuable it shows you the importance of imagination and integrity. Koky’s story is one that reflects that everyone has deep innate wisdom waiting inside themselves to be explored and accessed to improve their relationship with themselves and those around them. In this conversation, we discuss Koky Saly’s habits, hacks, philosophies, and tools that have formed the threads of his success, happiness, health, and wealth. This is a story about fully embracing your imagination and your true self! All this so that you can go out there and be the change you wish to see in the world!