Design a Life with Liza Joyan 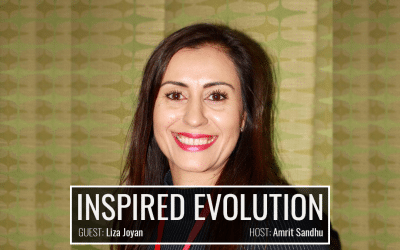 Our guest for this week is Liza Joyan, a relationship marketing strategist and the founder of Design a Life.

Liza was born in Afganistan and her family immigrated to Australia when she was a child. Her educational background is in Economics and Business Law and her career path led her to Canada where she spent years working in the field of Risk and Compliance, in both private and the public sector. She was also a part of a global network here she helped businesses experience from 20% to 400% growth using certain philosophies of relationship building, gratitude, reciprocity, and online tools. Liza was also involved with establishing teams in her network marketing business across 6 countries.

She has moved back to Australia after 12 years and recently started her own personal brand called Design a Life, which will eventually lead to a book and other educational material in the field of personal transformation. Namely, Liza’s personal journey of self-discovery and appreciation has helped her realize that she needed to focus on three things in life: freedom, contribution, and fun. By following these key principles she has managed to take that leap of faith and will focus on helping others discover their own path and design a life for themselves, and not be dictated by what designer labels tell them.

Freedom, Contribution, Fun… That is what Liza wrote on her notepad on a seemingly regular workday in a multi-million dollar company at the 31st floor of the tallest building in downtown Toronto. As it turns out, it was the day she decided to leave her corporate job and pursue her dreams.

Liza grew up along with 7 siblings in her family. She was born in Afghanistan but raised in Australia. Her parents immigrated when she was a child and her father instilled the idea of making the most out of every opportunity, early on. That attitude allowed to go very far in life, both professionally and physically. She moved to Canada in pursuit of great work opportunities and stayed there for 12 years.

On the day Liza decided to change her life, back in that corporate Toronto office, she felt anxious and frightened about what the future would hold for her.

“Suddenly, the walls of my office ended up feeling more of like a prison cell. And I don’t mean to be ungrateful for that, it’s just that it felt like that at that time. I felt trapped that I would have to come to an office every single day for the rest of my life.” – Liza Joyan

Sitting there, contemplating about her life Liza noticed the empty notepad in front of her, and without thinking wrote down the words that to this day guide her in her everyday life. Once she looked at the notepad again, the three things she put down were interestingly the ones she felt were missing from her life. Because of that profound moment of self-realization, Liza chose to leave the corporate world behind, focus on designing a life for herself, and serve her community by helping others take that leap of faith and realigning with their values.

The Future of Business: Room for the Soul

“I truly believe that corporations that are being created that are so large, I immediately felt the lack of soul.” – Liza Joyan

Liza discusses the impersonal nature of working at a large corporation, something she has experienced first-hand quite well. She predicts that this will become the point upon which the next era in the business world will be formed. The Millennials are a workforce very unique bringing along a whole array of different beliefs and needs. The corporate owners, however, need to learn how to respond to those needs in order to remain competitive. If they ignore this demand coming from the average worker, they might be in the problematic situation of not being able to attract and retain what should be a company’s most valuable resource – the people working for it.

“But I truly have a sense and an intuition that the future of business is going to have to be something that is on a smaller scale.” – Liza Joyan

Whether or not will corporations be able to adapt is a point open for discussion. Liza believes that the future of work is going to be realized through smaller organizations and more direct interactions between businesses and clients, or in B2B relations. The rise of AI, as Liza ever so perceptively puts it, and the fact that it will make a number of job openings obsolete will play a key role in the way things will begin to unfold.

“Life is about connection, celebration, and appreciation. If you can do those three things daily… what that does it doesn’t just build others, it builds you.” Liza Joyan

This is just one example of how, in the podcast, you can see Liza’s desire to motivate and inspire rise to the surface. By urging us to incorporate these three concepts into our daily routine she is basically giving us a recipe for not only improving the lives of others but raise the quality of our own lives as well. Connecting with the people around us, engaging them in conversation and interacting with them without a goal of self-promotion, but purely for the sake of showing them how much they mean to you and celebrating them and your relationship. Living the life of inspired evolution! YEW!

“I just can only imagine if millions of people did this per day and just authentically and genuinely showed appreciation, connection, and celebration. That’s world peace!” – Liza Joyan

Liza’s story is representative of a situation many people are facing at the moment. The idea of discovering your values and realigning your life with them is slowly but surely becoming a norm. Liza took control over her life, re-examined things most important to her, and made the leap of fate. We can all find inspiration in those actions and she gleefully invites all of us to:

“Give yourself permission to go within and really design your own life. Design the things that you want!” – Liza Joyan