Overcoming Adversity to Make a Real Impact with Martyn Sibley 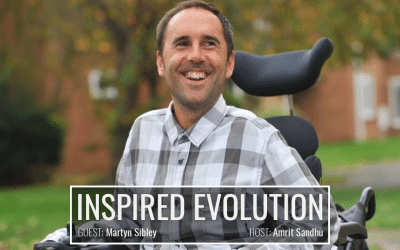 This week we’re joined by Martyn Sibley, a serial entrepreneur, author and the co-founder and CEO of Disability Horizons, an online disability lifestyle magazine that aims to give people with disabilities a voice.

Martyn is suffering from a condition called Spinal Muscular Atrophy (SMA), a genetic condition that makes the muscles weaker and causes problems with movement. Experiencing both societal exclusion and a feeling of inferiority because of it hasn’t stopped him in any shape or form from achieving his life goals and dreams. From gaining a Masters degree in Economics and Marketing to working for a huge NGO, to becoming a successful entrepreneur, he has shown that with a right attitude and approach we can all become captains of our own destiny.

Martyn started his career working for Scope, a disability equality charity. After several years, he felt that he is not reaching his full potential, so he decided to pursue and explore the entrepreneurial lifestyle. From his passion for helping others by sharing his experiences, an idea for an online magazine was born. He co-founded Disability Horizons back in 2011 and has been providing people with disabilities with valuable insights on the topics of technology, relationships, sports, employment, and travel ever since. In 2015 Martyn had co-founded Accomable, an online portal for accessible tourism which was subsequently acquired by Airbnb.

He is also a published author, having released a book titled “Everything is Possible”, in 2016. After successfully funding the project through Kickstarter, Martyn shared his experiences from his travels around the world, hoping to provide others with energy and motivation on their path to self-actualization.

Martyn also hosts his own podcast called “The Martyn Sibley Show” where he interviews influential and successful people, covering all aspects of life from politics to sport, from business to arts.

It doesn’t really matter if he’s traveling across the far ends of the globe, blogging about his ideas and experiences, or even flying a plane, Martyn is on a path of inspiring others, regardless of whether they’re struggling with disability or not.

Becoming an Entrepreneur in the Face of Adversity

“I’ve always been a dreamer and wanted the world to be a better place.” – Martyn Sibley

Drawing inspiration from the great entrepreneurial minds of our days, naming Richard Branson as an example, Martyn has always felt deep inside him the desire to run his own business one day. With Disability Horizons, he has made his dreams into reality, providing people with disabilities with an abundance of interesting stories and articles, but more importantly, building a sense of community around his brand.

While working at Scope, he gained relevant experience which would help him become a successful business owner he is today. But to be truly happy and achieve his full potential, he had to leave the sense of security coming from a steady 9 to 5 job, and dive deep into the oceans of entrepreneurial lifestyle where uncertainty and new challenges are an everyday theme.

“I had this dread about getting up every morning and going to the same office. Sitting in the traffic in London, and stuck at my desk and being in all these meetings that didn’t feel kind of purposeful.“ – Martyn Sibley

Getting into Blogging and Starting His Own Business

“When I was a teenager, if someone was like 10, 20 years older, and was doing a load of cool stuff, it wouldn’t have mattered if I did exactly the same things, just to know it was possible would have been really, really powerful.” – Martyn Sibley

After leaving Scope, Martyn started blogging about his experiences in order to give other people with disabilities an insight into what can be achieved in spite of adversity. The idea of being a living proof of what can be achieved with a right attitude was what kept him going. Over time he got more and more exposure in the media, all the while reaching a bigger audience with his message and building a solid foundation for his very own startup. At the moment, Disability Horizons has an amazing 50 000 readers per month, an audience predominantly consisting of people with disabilities and their families.

“I’ve got this… like a calling, it felt… to share my personal story, and make them feel that the world is actually open and accessible. And even if it’s not open and accessible in a physical way all the time, there are still so many opportunities to go and grab.” – Martyn Sibley

Working on his magazine and interacting with his audience, Martyn acquired useful insight which led him to co-found Accomable, an accessible travel startup that helped people with disabilities find and book adapted holiday accommodation worldwide online. With their initial elevator pitch being “Airbnb for disabled people”, it is incredible to see things coming full circle with Airbnb actually acquiring Accommable two years later.

A Message for Everyone

Considering everything that’s happened in the past couple of years, Martyn has come to a realization that his true mission is to help everyone, and not just those with disabilities.

“I’ve come to realize that I shouldn’t limit myself just to supporting disabled people… We’re still doing all that stuff for disabled people… But really building on it and using my experiences to help all people.” – Martyn Sibley

His new message, going beyond disability, is cemented in getting to know ourselves, building a community and striving for freedom. Martyn believes that in order to take charge of our lives we need to know and be aware of things that are most important to us.

“If we understand what our beliefs are and check if they’re serving our true self, then we really can be the captain of our own destiny.” – Martyn Sibley

Through videos, podcasts, blogging, and social media, Martyn has created a community and essentially provided people with a place to witness and exchange experiences which lead to self-improvement.

Finally, he also reflects on how freedom to do things we really want coming from being a business owner, is an important factor in his journey to change the world. Even though Martyn is fully aware that there are people who do not necessarily share this aspiration and find the employee life more suitable for their needs, his first-hand experience has made him cherish the freedom entrepreneurship brought to his life.

“There’s definitely a lot around disability that instills entrepreneurial skills and knowledge in you. They’re the push factors.” – Martyn Sibley

Martyn goes on to describe how living with a disability has affected him and pushed him to develop different skills which allowed him to become so successful in today’s business world. Having to fight against the stigma of disability which is widely spread through media, has made him more resilient and even more determined to help others.

He also credits his experiences with Mindvalley with playing an important part on his road to personal growth and self-improvement.

What Does the Future Hold?

Martyn is currently looking into producing an online course in which plans to unpack his ideas and teachings. He has spent a lot of time doing research and he is hoping that through developing his course, he will be able to convey his message in a slightly more structured way, which will allow him to educate people all over the world.

“What matters is… what experiences you’ve had, what growth have you had and what impact you’ve made.” – Martyn Sibley