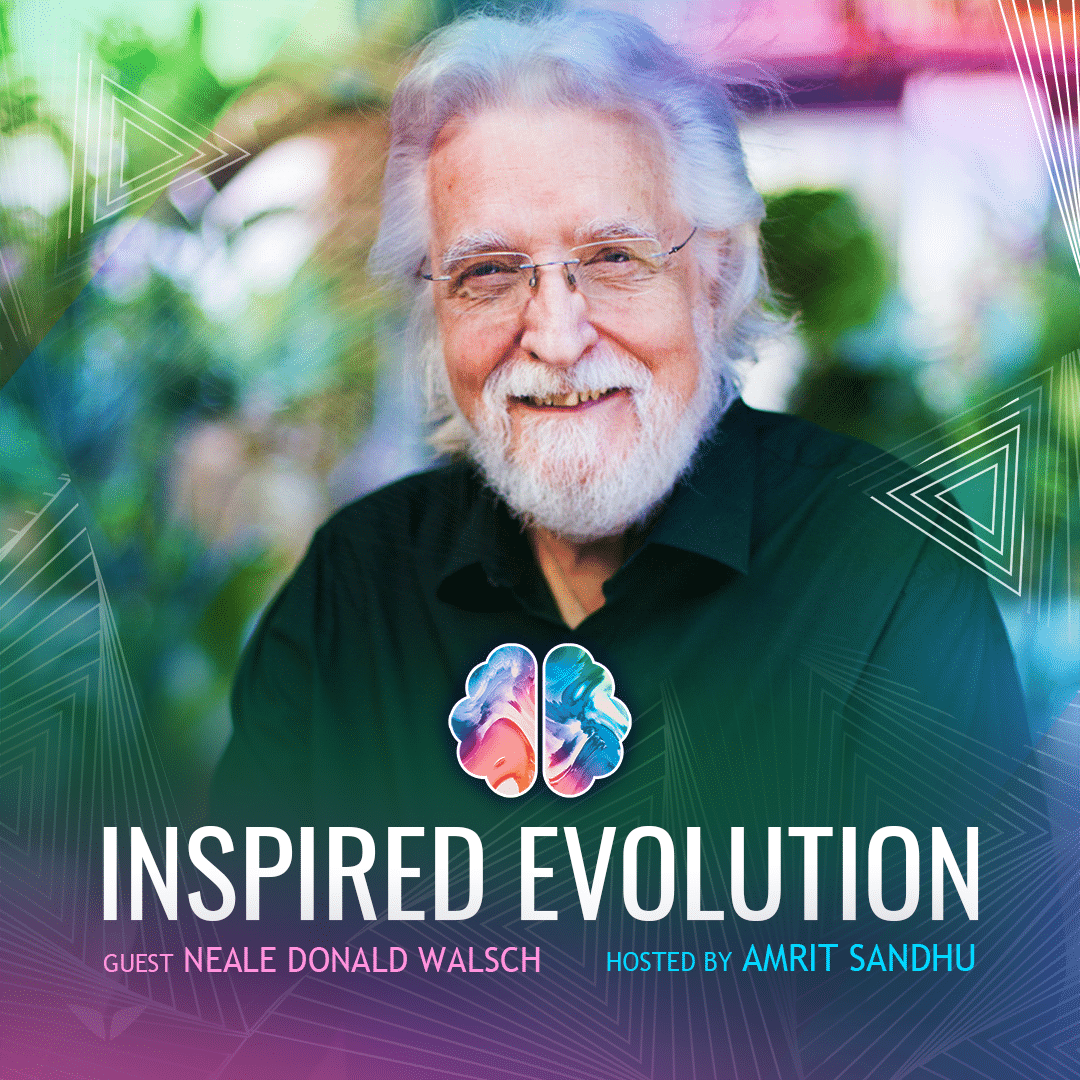 Our guest this week is Neale Donald Walsch, is a writer, actor, speaker, globally recognized as the author of the life-changing “Conversations with God” book series. Book available HERE.

Neale is a modern-day spiritual messenger whose words continue to touch the world in profound ways. With an early interest in religion and a deeply felt connection to spirituality, Neale spent the majority of his life searching for spiritual meaning before experiencing his now famous conversation with God. The Conversations with God series of books that emerged from those encounters have been translated into 37 languages, touching millions and inspiring important changes in their day-to-day lives.

Neale has written 29 books on spirituality and its practical application in everyday life. In order to deal with the enormous response to his writings, Neale has created several outreach projects, including the CWG Foundation all dedicated to helping the world move from violence to peace, from confusion to clarity, and from anger to love.

Neale’s work has taken him from the steps of Macchu Picchu in Peru to the steps of the Shinto shrines of Japan, from Red Square in Moscow to St. Peter’s Square in Vatican City to Tiananmen Square in China. And everywhere he has gone, from South Africa to Norway, Croatia to The Netherlands, the streets of Zurich to the streets of Seoul, Neale has experienced a hunger among the people to find a new way to live, at last, in peace and harmony, and he has sought to bring people a new understanding of life and of God which would allow them to experience that.

And if you want to learn from Neale AND more of the world’s leading spiritual teachers
such as Rev Michael Beckwith, Sonia Choquette, Dr. Shefali, Steven Kotler, Robin Sharma, and more…
We highly recommend Mindvalley’s All-Access Pass available here:
https://inspiredevolution.com/recommends/mindvalley/

People see outcomes but they don’t know what the cause of the outcomes is, and that in itself is the biggest problem in the world today. We all, for example, know that our civilization won’t start moving in the direction that we would like it to move in, but we don’t know why. The fallout from that though is alienation, and it’s visible all over the world in such enormous magnitudes even during the current Coronavirus pandemic when we are all supposed to be united. Neale feels that at some higher level, the force of alienation and unity are meeting face to face at the same time for a reason that has to do with the evolution of our species.

Alienation is absolutely necessary for connection to take place because we as human beings cannot develop the desire for connection unless we experience the lack of it through a certain level of widespread alienation and all the negative impact that comes with it.

“In the absence of what we are not, what we are cannot be experienced” – Neale Donald Walsch

Through self-awareness, we become decision-makers and have a key role to play in the process by which we evolve because we are aware of what is going on with us, in us, as us, and through us, in every moment of our lives, and we can make decisions that affect that experience. In order to make those decisions, we must choose between a number of choices that are based on four fundamental questions, namely, Who am I?, Where am I?, Why am I where I am?, and What do I intend to do about my answer to the third question? A lot of people don’t know who they are or why they’re here because they don’t even attempt to ask the four questions.

The current shift that’s taking place, especially due to the pandemic we’re experiencing, has pushed people towards asking the four fundamental questions because they are seeing things as they know them changing in ways they could have never thought possible. Human beings as a species are now gathering the truth and growing.

Anyone can speak as the mouthpiece of God because nobody is separate from the divine. Neale highlights that God puts words into his mouth just as much as he does into the mouths of others, and that happens in the form of inspiration. Inspiration is all about one declaring and announcing concepts and ideas that they believe in their heart to be true, and that they believe in their heart to have been inspired by the divine.

Doing unto others as we would like done unto us is a simple tool that we can all use to integrate unconditional love into our daily expression of love. Another way of doing it is by questioning a choice before we make it and asking ourselves what it has to do with the agenda of our individual soul. That puts the choice in a brand new context and so one longer considers it as they had done initially.

Spirituality is just a larger word for belief, and it’s a word we use when we want to talk about our most sacred beliefs. Even though we may not realize, a lot of our spiritual beliefs unconsciously dictate the actions, choices, and decisions we make in our everyday life. Neale feels that even though there has been the issue of our spiritual and religious beliefs being instilled in us without our full understanding, we must acknowledge that they have taught us a lot of true things about life and deity. He highlights that it’s time to look at all the fundamental elements of our world’s religions to see what it is we don’t understand because that could change everything.

“It’s time to take a close look at the fundamental elements of our world’s religions to see if there is something we don’t fully understand, the understanding of which would change everything” – Neale Donald Walsch

Inspired evolution to Neale means evolution based on our here and now experience and our here and now highest desire. It’s not based on our understandings from the past. We have to be willing to let go of our understandings from the past, not to abandon them but to temporarily release them and then re-evaluate them to see which ones are worthy to be held on to. A great example of how we question our beliefs is how we question our oneness by thinking that we are separate from each other when in reality we are a single entity simply expressing in individual parts.

And if you want to learn from Neale AND more of the world’s leading spiritual teachers
such as Rev Michael Beckwith, Sonia Choquette, Dr. Shefali, Steven Kotler, Robin Sharma, and more…
We highly recommend Mindvalley’s All-Access Pass available here:
https://inspiredevolution.com/recommends/mindvalley/