Freedom From Fear with Niall McInnes 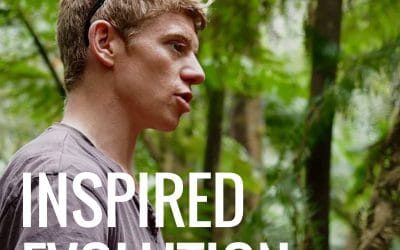 What Worries You, Masters You. In this episode of Inspired Evolution, our Freedom is Inspired by Niall McInnes. Niall is not-so-affectionately known as the “Fear Coach”. Niall is a coach specializing in removing emotional constrictions to allow the authentic self to shine through. He has a deep passion for the freedom created after stepping into uncomfortable situations. He isn’t just a preacher of this wisdom, he embodies it: From Professional Extreme Sports, Professional Kick-Boxing Fights, Standup Comedy to Sleeping on the Streets, Fasting, Silent Retreats and Pickup.

We start this discussion exploring Rites of Passages, Coming of Age Ceremonies and Initiations such as going Walkabout as exemplified by the Australia Indigenous. Reflecting on the lack of such cultural milestones in the modern western culture.

A deep conversation around depression emerges from men inhibited from approaching their emotions fear for men. We discuss the pride and ego strength of masculinity at face value compared to the true depth of strength that comes from getting vulnerable and emotional. There’s a balance to be struck. Beginning with having the courage to be authentic and say “I’m scared” either way.

Niall describes his fascination with the physical fear he experiences from such extreme activities as bull-riding or professional fighting… In comparison to the fears and symptoms, he experienced when starting his businesses or public speaking or meditating for the first time. They feel exactly the same. One is genuinely life-threatening, the other is perceived as life-challenging yet is not really so.

We launch into a conversation on Mind-Body connection and embodying lasting wisdom. Niall Describes his technique of clearing fear and restrictions by:
1. Taking Responsibility for the ‘problem’ and then,
2. Finding gratitude for the problem

Niall describes the importance and techniques of mental-visualization to cultivate a positive and success-oriented Mind-Body connection; plus the emotional or belief impedance we may have in the way. He highlights the wisdom that Transforming your life begins by Loving the parts of You, You Love the Least.

This conversation with the Fear Coach would be incomplete without discussing the Fear of Death. We discuss deeply Regret… Wow, a conversation I’m grateful to have had.

This conversation is raw and real: it encourages us to play the game of life “all out” beyond the limitations of fear. Niall’s story conveys that everyone is here to achieve something great and prompts us to question your relationship with yourself through your beliefs and emotions. In this conversation, we discuss Niall McInnes’ habits, hacks, philosophies, and tools that have formed the threads of his success, happiness, health, and wealth. This is a story that reminds us that we are all capable of living our dreams. Niall inspires a life of healing, transformation, and growth; Sometimes all it takes is getting out of our own way so that we can create an internal shift to align us to our highest potential.

Mankind Projects: The ManKind Project Australia is a volunteer organisation with charity status and operates from 5 centres in Australia in close cooperation with the groups in New Zealand. The global network spans South Africa, the United States, Mexico, Canada, the United Kingdom, Ireland, Belgium, France, Germany, Switzerland – a brotherhood of over 60,000 Men.
LINK: https://mkpau.org/

Walkabout: In Australian Indigenous society, Walkabout is a rite of passage during which males undergo a journey during adolescence, typically ages 10 to 16, and live in the wilderness for a period as long as six months to make the spiritual and traditional transition into manhood.
LINK: https://en.wikipedia.org/wiki/Walkabout

Boy To Man:
In “Boy to Man”, adventurer and filmmaker Tim Noonan embarks on a solo journey of self-discovery to worlds beyond his imagination to try and unlock the mysteries of some of the most ancient tribes and to discover what it means to be the ultimate man.
With just his gear and cameras, Noonan first has to earn the tribe’s trust. He is put through rituals, initiations and grueling tests to man-up and prove himself worthy of their respect.
Throughout the series, Noonan travels the world, stopping in places such as Cameroon to dive underground to catch huge snakes; tame wild horses in Venezuela; and fish for sharks with the shark people of Papua New Guinea.
LINK: http://www.bbcaustralia.com/shows/boy-to-man/

Land Diving: Traditional origins of Bungie Jumping
Land diving (known in the local Sa Language as Gol and in Bislama Nanggol) is a ritual performed by the men of the southern part of Pentecost Island, Vanuata. The precursor to bungee jumping, men jump off wooden towers around 20 to 30 meters (66 to 98 ft) high, with two tree vines wrapped around the ankles. Land diving is done without any safety equipment, except for the vines. The tradition has developed into a tourist attraction. According to the Guinness World Records, the g-force experienced by those at their lowest point in the dive is the greatest experienced in the non-industrialized world by humans.
LINK: https://en.wikipedia.org/wiki/Land_diving

Masaai Warriors (Kenya) Right of Passage:
The Maasai of Kenya and Tanzania have a series of rites of passage that carry boys into manhood. Every 10 or 15 years a new warrior class will be initiated into the tribe. Boys between the ages of 10 and 20 are brought together from all across the country. Dozens of houses are built that will serve as the place of initiation. The night before the ceremony, the boys sleep outside in the forest. At dawn, they return to the little makeshift homestead for a day of singing and dancing.  They drink a mixture of milk, cow’s blood, and alcohol and eat piles and piles of meat. After the festivities, boys who are of age (12-16) are ready to be circumcised.
The Emuratare is the most important ceremony in the life of a Maasai boy. Once circumcised, the tribe will consider him a man, warrior, and protector of his village. As the young man makes his way to where the elders will circumcise him, friends and family members will taunt the boy by saying things like “If you flinch, we will disown you.” The Maasai value bravery in their warriors and the circumcision is a boy’s first way to prove his courage even in the face of severe pain. It takes about 3 months for the circumcision to heal and during that time the young men wear black clothing and live in huts built by the women of the villiage. The Maasai boy is now warrior.
For the next 10 years the young men live together in an Emanyatta, or warriors camp. There they learn fighting, oratory, and animal husbandry. After 10 years, the young men take part in the Eunoto ceremony that marks the transition from warrior to senior warrior. After a Maasai has passed through the Eunoto, he can marry. The ceremony is basically several days of festivals, which ends with the initiate’s mother shaving his hair.
LINK: https://www.youtube.com/watch?v=znq3DipBXPE

Jon Jones (UFC Champion): “All my butterflies are aligned’
“When you have butterflies and you’re feeling anxious and you have anxiety or are nervous, that’s when you’re most powerful… A lot of people, instead of honing this power and using it, they allow it to just consume them. There’s another quote that says, ‘A big challenge, a big pressure is like a fire, it’s like a raging fire. Either you can allow this fire to consume you and just take you over completely, or you can gain control of this fire and harness it and you blow it right at your opponent, Dragonball Z style.’ That’s what I’m trying to do, trying to get my emotions under control and use this adrenaline to my advantage.”
LINK: https://www.youtube.com/watch?v=42RU5cRY4bw