Love Out Loud with Nicole Gibson 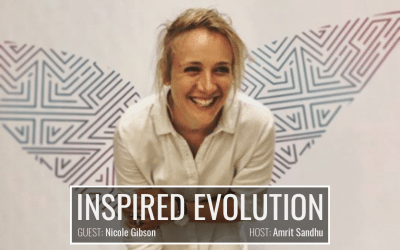 In this week’s episode, we‘re joined by Nicole Gibson, a multi-award winning social entrepreneur, published author, but most of all, an unstoppable messenger of love and human potential.

When she was 18 years old, she started a not-for-profit company called The Rogue & Rouge Foundation dedicated to battling the mental health stigma through a community-based approach, reaching out to children and parents through schools and community groups. The inspiration for starting her own charitable organization came from her own struggles of dealing with anorexia nervosa throughout her teenage years. She was afraid to return to a society which was not able to understand her struggles, so she made a commitment to passionately rebel against Australia’s negative stereotypes.

Over the years, Nicole has received many different awards and honors for her contributions to society, the most prominent one being the Pride of Australia Inspiration Medal in 2014. She was also listed as one of Australia’s top 100 most influential women when she was only 21 years old!

Nicole has published her first book titled “Love Out Loud”. It is a personal account of her own journey finding her way back to love, and a guide for others that should help them do the same. Aside from that, Nicole also created a unique Love Out Loud online program which is designed to help you shift your mindset and learn to Love Louder with just 15 minutes a day.

Throughout her career, Nicole has spoken to and facilitated workshops and presentations for over 250 000 Australians. Using her own background of 10 years in theatre training, she developed a facilitation method in order to spiritually educate and raise awareness about mental illness.

Nicole invites us to transform ourselves, realize our potential and understand our responsibility to give back to the world.

In her teenage years, Nicole has struggled with an eating disorder known as anorexia nervosa. She openly describes intricate details and thought processes of dealing with mental illness and points out the “feeling of having to be a particular way to meet other people’s expectations” as the main culprit and driving force behind the disorder. Aside from experiencing great emotional pain, Nicole was suffering from immense physical pain as well.

One of the key turning points for Nicole came from releasing herself from being the focal point of her overwhelming thoughts and self-analysis. Turning her attention outwards to the world, she “started listening”, and what she received from that listening is a realization that “life is about giving and service.” She understood that there is a greater side to her story, and set upon her path of transformation, even though the path itself was not yet well-defined.

“I think we always know how to make it happen, but we’re not always prepared to listen.” – Nicole Gibson

Honesty as an Essential Agency for Change

“It’s one thing to think positive and know that you can live the life of your dreams, it’s another thing to really face your shit and look at where you’re not being honest.” – Nicole Gibson

Nicole highlights honesty as one of the key conditions needed for transformation. Being able to be alone with yourself, taking in what comes up and learning how to deal with it is the fundamental step in the process of self-improvement. Once you are able to “sit with your s***”, you will establish spiritual tranquility, meaning you will no longer be a slave to your deep insecurities or negativity but will have more energy to think of practical ways how to and actually overcome them.

“Until you’re really honest about where you’re at, you can’t change, you can’t transform.” – Nicole Gibson

Or to put it in another way, as a line directly pulled from her book, “We can’t heal what we don’t reveal.” It is necessary to know what the problem is if you’re trying to eradicate or transcend it. She acknowledges meditation as one of the most useful settings for being honest with yourself and expresses piercing insight into why most people find meditation an unpleasant activity at first.

“The reason you hate meditation is because every time you try to meditate, the first thing that comes up is your guilt, your shame, and your insecurities, but that’s coming up so that you can be aware of that. And via that awareness, you can actually work through it.” – Nicole Gibson

Validation vs. Acknowledgement – Barrier vs. Blessing?

“I knew that if I was seeking validation I was never going to feel validated.” – Nicole Gibson

Nicole makes a very important distinction between two relevant driving forces in our lives. One being validation being a more superficial, potentially damaging and irrelevant for spiritual growth, and the other being acknowledgement, a deeper feeling of appreciation and acceptance which starts with one’s self.

“Acknowledgment begins with you. Unless I can look at the person in the mirror, and actually acknowledge myself and my journey, how could I ever feel that or experience that from another person?” – Nicole Gibson

Acknowledgment is about giving. It’s about being humble, serving and giving back. Aside from acknowledging yourself, you can also use it to bring out the change in others and also give them strength to their viewpoint.

“To receive someone’s gift is to actually to allow their perception of the world to be strengthened by you.” – Nicole Gibson

The Difference Between Being Lonely and Being Alone

In her book “Love Out Loud”, Nicole has condensed her last 7 years of being an unstoppable messenger of love and human potential. She talks all about honesty, acknowledgement, love and the human connection.

“The first premise is that we’re all immensely connected. But we’re not always conscious of the fact that we’re connected.” – Nicole Gibson

Not being consciously aware and acting upon this idea of being connected with others will most definitely have you ending up in a place of feeling lonely. But being alone is not synonymous with being lonely. No one should choose to loneliness, but we should, from time to time, seek and savor aloneness because it is a prerequisite for personal growth. We need to be able to find the time and give ourselves space to search for wisdom within and explore things that are true to us.

“You can and will find solace and peace in your aloneness.” – Nicole Gibson