SOMA Awakening: Wake up to Your Truth with Niraj Naik 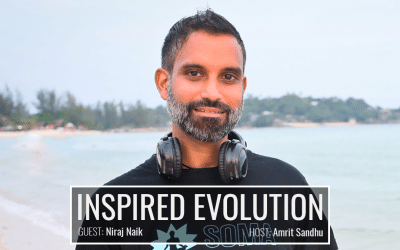 Our guest for this week is Niraj Naik (aka the Renegade Pharmacist), a qualified pharmacist, professional musician, holistic health expert, and entrepreneur.

Years of working as a community pharmacist have given Niraj an opportunity to witness first hand the many difficulties people endure when dealing with illness. One of the key observations he made was that many of his customers kept coming back week in and week out, getting their medication as prescribed, with little to no improvements and being overwhelmed with side-effects. This led him to explore alternative ways for reaching optimal health and resulted in him developing his own method and a lifestyle plan, designed to help his patients.

In 2010, Niraj was diagnosed with stress-related ulcerative colitis, which kept him housebound for 10 months. He was told by doctors that there was no cure for his illness and that he would need to take medication for the rest of his life to control it. The side-effects of his prescription drugs were becoming too much, leaving him often hopeless and even suicidal at times.

He decided to step away from conventional medicine and study people who have managed to heal themselves in alternative ways. Combining techniques and knowledge from different disciplines like yoga, NLP, self-hypnosis, all the while incorporating dietary recommendations from Paleo and SCD to his daily routine, Niraj finally managed to overcome his illness, without medication.

Niraj has also been exploring sound and music therapy in terms of reducing stress and promoting self-healing. Niraj has composed music for healing centers, spas, and therapists worldwide, and his work was included in the programs and videos of renowned experts such as Marisa Peer and Wim Hof.

His latest project called SOMA Awakening is a group breathwork multisensory meditation experience that can awaken dormant parts of your brain, improve circulation, promote healing, transmute sexual life force energy and help to manifest your intentions taking your meditation practice to the next level. Soma Breath is being taught at wellness centers in Niraj’s second home of the island of Koh Phangan, Thailand. He has launched a successful teacher training that is proving to be very popular, with his first students already creating and facilitating their own paid workshops, and even showcasing their new skills at festivals.

After overcoming a debilitating and house-confining illness cultivating the power of the mind, Niraj is aiming to teach and spread the knowledge he has acquired over the years and help people improve, transform and optimize their physical and mental health.

Dealing with a debilitating condition, along with suffering from side-effects of the prescribed medication has left Niraj in a state of emotional numbness and despair. The ulcerative colitis just pilled on to an already depressing situation of struggling to get his own ideas of how to improve people’s health across. At his lowest, in what can only be described as a moment of fate, Niraj met with a spiritual yoga teacher. Their encounter shifted his downward spiraling life story and gave him the much-needed energy and inspiration to find a way to help himself when no one else could.

Using essential techniques of pranayama, yoga, and Ayurveda, Niraj managed to regain his spiritual balance and ultimately heal himself, leaving medication and conventional medicine behind. He has managed to improve his health, but the whole experience left him more curious than ever. He decided to explore and try to answer the question of just how did he manage to help himself when all hope seemed lost.

Exploring the Mechanism and Refining His Art

Avoiding the dogmatic, Niraj dived deep into discovering the mechanics behind his healing process, and once he found answers he was looking for, he continued to explore and develop his own technique to help others achieve optimal health in a more efficient manner. The first step was involving himself with exploring and creating meditational music because he believed it plays a key role in restoring balance and harmony. His works are now validated by the likes of Marisa Peer, which uses his trypnaural melodies in her training videos.

Evoking the Brain Change Without Stress

“Every artist, I believe, must suffer a little bit in order to really make valuable art.” – Niraj Naik

Niraj has observed suffering to be the common thread as the thing that connects artists from different fields. He believes that the stress and adversity they’ve experienced in their life is the factor which allowed them to think outside of the box, expand their minds and evolve.

“Everything I do now is all about helping people to invoke that brain change without going through the stress, and the way you do that is by reaching these ecstatic states. Without substances, without narcotics, just using what we already have inside.” – Niraj Naik

Niraj wanted to see if he could develop a setting in which people could change the way they think and behave in a safe, controlled environment, without having to experience large amounts of stress and not having to use psychedelic drugs. He researched ancient wisdom of reaching ecstatic states by cultivating the power of our own bodies, which he incorporated into his own method. Using breathwork techniques, Niraj is now teaching others how to cultivate the sexual energy from their bodies and move it up to the brain, in order to create cognitive changes in the brain.

“There’s a reason why monks don’t have sex and they’re celibate. It’s because they’re harnessing the sexual energy and transmuting it for a higher purpose.” – Niraj Naik

FOFO – The Fear of Feeling Out

Niraj talks about getting a handle of our reptilian brain as “charming the snake”. He believes that the number one thing which gets us rattled up and influences the snake the most is FOFO or “the fear of feeling out”. Succumbing to the pressure of fitting in and conforming to the standards of today’s society makes us constantly do things we don’t want, just so we could please the expectations of others, hurting ourselves mentally and physically in the process.

“Have a think about how many things are you doing right now that serves your best interests, and how many things that you’re doing are based on what other people expect you to do.” – Niraj Naik

Using what he now calls SOMA (which also stands for ‘the Science of Magnetic Attraction) breathing techniques, accompanied by positive self-talk and optimistic messages, Niraj provides others with the tool to “charm the snake”, master the laws of attraction and to not be a victim of your own stress, but to control it. Niraj has made it his mission to help others realize that by serving the expectations of others, and hurting ourselves in the process, we are actually helping no one in the end. In order to take control of the reptilian fundamentals of our brains, we must cut through all the lies and the rationalizations we tell ourselves.

“Be honest with yourself. Always.” – Niraj Naik