Love the Earth with Pana Barbounis 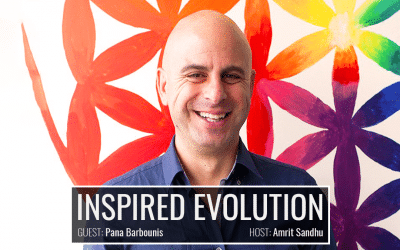 Our guest for this week is Pana Barbounis, a chocolatier, entrepreneur, and founder of Pana Organic.

Pana has always been extremely passionate about food. He’s acquired over 20 years of experience in the hospitality industry. But, in 2011, with a base in Melbourne, Australia, he started his very own brand of raw, vegan, organic, Fairtrade and certified as kosher and halal chocolate called Pana Chocolate. Today his chocolate is being sold worldwide and they’re also offering other organic products like dairy-free ice-cream. Pana Chocolate is cooperating with some of the worlds biggest brands such as Virgin Airlines and their chocolate is also available in large venues such as the Etihad sports stadium in Melbourne.

Pana Organic is a highly environmentally aware company and is also involved with a lot of tree planting charities. To this day, Pana’s organization has planted over 60 000 trees, raising the bar each year.

Pana has also published a book of recipes called “Pana Chocolate, the Recipes” which is a collection of 70 recipes for vegans and healthy-aware sweet-tooths. It teaches you how to make some of the most amazing desserts, from cakes and dishes for kid’s parties to traditional raw chocolate recipes that will take your breath away. It also features the story of the Pana Chocolate company and how they managed to reach a global following making a product that avoids all preservatives, dairy, gluten, soy, refined sugar yet still tastes incredible!

“Even though I’ve been successful, essentially, in some people’s eyes, from a financial [point of view], I felt unfulfilled in a lot of ways and I always felt like I was just doing things for the sake of it.” – Pana Barbounis

Pana Chocolate wasn’t built in a day. Even though he was always fascinated by food and he was working with it for quite some time, Pana realized that he was to some extent not living the life he was supposed to. His story is another proof that success is what we make of it, and that each person has their own definition they need to live their life by. It is only then when we truly get a chance to shine.

So, Pana took a couple of years of sabbatical, and in that time the world kept leaving little signs along the road for him which teased what’s yet to come. He was introduced to raw chocolate by a friend and having seen the movie Chocolat, he was already in the mood for getting involved with making one of the most popular treats. He visited the UK and trained for some time in Belgium with some traditional chocolate makers, but upon returning to Melbourne, locked himself in a room for 6 months and experimented with different recipes on a daily basis.

His very first batch of chocolate had a lot of similar qualities of the Pana Chocolates you can buy in different stores and venues across the world today. It was handmade, raw, hand wrapped with hidden messages of love inside it. But thankfully, he no longer has to distribute them himself on a Vespa!

“I wanted that experience, I wanted those touchpoints from the moment you touch the cardboard.” – Pana Barbounis

Searching for a Deeper Meaning in Your Work

“Money isn’t everything. It can bring some happiness but it doesn’t make happiness.” – Pana Barbounis

Pana wasn’t always motivated by his intrinsic values. He had to go through a phase of trying to make your ends meet striving for financial security like most of us. At some points in his career, it felt like he was too focused on the wrong things. He mentions that if you’re placing too much attention on competition and what everybody else thinks, it’s pretty easy to get into an unhealthy mindset and neglect the things that are most important to you.

Around the same time he discovered his true passion, he started developing a new kind of relationship with money. His company values reflect these same ideas, where the most important thing is creating a quality product which comes from a place of love, while also being environmentally conscious. It’s all about being able to make mistakes and learn from them and nurture good relationships in a team.

Pana’s professional journey is also a very spiritual one and demonstrates what we as humans are able to achieve when our work comes from a place of love. He took the time to figure out what he wanted to do in life and from that soul-searching adventure came a brand new one. To this day, Pana is continuously reinventing himself while being guided by the same core values that led to him creating his life’s work. His words of inspiration for us dive deep into the fundamentals of the creative process:

“Stay true to yourself… Believe in yourself and believe in your own intuition of what you’re creating.” – Pana Barbounis