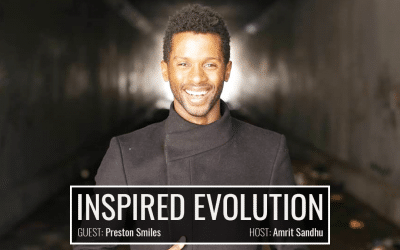 Our guest for this week is Preston Smiles, an author, motivational speaker, and a personal freedom coach.

Preston grew up facing adversity in many aspects of his life. In school, he struggled with dyslexia and was labeled as someone who needed special needs education. But outside of school, he faced the real, life-threatening challenges. In his teens, he joined a gang that started off as a petty theft group, but later on, got into more dangerous dealings. He decided to pass on an offer to go for a “routine round of mischief” because he felt deep inside that something was not right. Later that night, his friends were shot and the tragedy shock Preston to his very core. He surrendered and realized that he needed to find a higher purpose in life, far away from the world of organized crime.

Years have past and Preston is now an acclaimed motivational messenger, spreading the words of inspiration, empowerment and particularly, love. His goal is to “empower, inspire and ignite a multi-generational movement of radical growth through conscious, creative content, acts of love and living boldly.”

In 2016, Preston published his book titled “Love Louder: 33 Ways to Amplify Your Life”, in which he teaches his positive philosophy aimed at getting more out of life in terms of love, purpose, and meaning. His book is a practical guide for people looking to live more exciting lives, increase productivity, achieve clarity and gain confidence.

He is currently holding a 2 Day Mens Immersive Workshop called Unleash the BEAST focused on helping men unlock their purpose, conquer fear and step into their power through a range of exercises, challenges, and stretches. Unleash the BEAST starts on the 25th of May!

Things we’ve experienced in our youth will to some extent shape us into the type of people we become, into our future-selves. However, our approach to life will affect whether or not we learn from these experiences or keep on making the same mistakes over and over again. Listening to Preston’s story, you can actually connect the dots and witness his growth mindset at play. It might not be intuitive that a young man who was a member of a gang in his teens will grow up to become an amazing ray of motivation and inspiration, but it is exactly these experiences that Preston acknowledges as necessary steps in his development.

“I was never in the “wrong” crowd… Those people who happen to be African-Amazing weren’t the wrong people, they were the right people to help me see with the eye behind the eye, the real truth… which is, love is all there is, was and ever will be.” – Preston Smiles

Growing up, Preston got a chance to experience two different cultures. One where certain unethical behaviors set people on the path of imprisonment, while in the other, people engaging in those same behaviors went on to live the lives of Ivy League graduates. This insight has allowed Preston to witness first hand how our world is shaped by social constructs through discourse, the language we use. He believes that these patterns in human behavior are caused by “historical and social programming” and that we need to become aware of these mechanisms so that we can see and focus on what’s truly important.

“We build worlds with our language and I’m constantly asking myself what type of world am I building with the language I’m using? – Preston Smiles

Putting an End to Suffering

“You have a duty in your world, in your context, in your framework to shine your light as bright as possible because people are freaking suffering right now.” – Preston Smiles

We explore the details of a worrisome phenomenon called “deaths of despair”, first recognized in the United States but its indicators have been documented also in Great Britain, Australia, and other Western cultures well. It is identified as a pattern of suicides and opioid-related deaths in parts of the population which is plagued by despair due to a bleak economic and social situation. This is such a broad issue that affects big portions of our society and that is why Preston calls for us to act preventatively and act as protectors of our society’s mental health.

“Even the worst stuff that we can name on this planet, has been some of the most beautiful, biggest blessings that people have experienced in themselves.” – Preston Smiles

Preston shares his impressions from parts of the world Western civilization usually refers to as “poor” and “struggling”. He was astounded by the mindset of people coming from overpopulated sections of India and places in Africa that don’t have clean water. To most people living in developed countries, these adversities are almost unimaginable, but that doesn’t stop us from fixating on other issues and creating new types of problems in our minds. Preston’s philosophy is that even the most difficult situations are blessings in disguise as they will allow us to develop into better versions of ourselves. Yet we tend to dwell on the situation and not get excited for the great things we’re allowed to do by overcoming our obstacles.

What it is really starting to look like, as Preston so eloquently puts it, is that we’re becoming a “society of control freaks”. This behavior is rooted in deep fear that somehow, in some way, every chance we get is either the most important one or our last. But the problem is that is not how life works at all. And when this approach to life is faced with the unpredictability of life, the most common responses are anxiety, depression, stress, and despair. Letting go of the need to control every single outcome is one of the first steps towards a happier life.

“Do you think God is done with you? Do you think the Universe is going to stop at you?” – Preston Smiles

Speaking to Preston has truly been a blessing. At the core of his message is love but one of the main impressions that I took away from our conversation is that gratitude seems to be his consistent companion on the journey of life. And when love and gratitude go hand in hand you have an unstoppable wave of warmth and life which is something that becomes obvious every time you hear Preston speak. His message of Inspired Evolution at times feels like pure poetry:

“Love is all there is. What would love do now?… What do I choose?” – Preston Smiles