The Nomadic Diaries with Psyman OChen 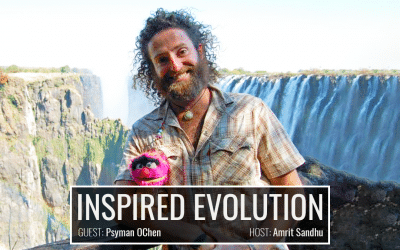 Our guest for this week is Psyman OChen, a nomadic traveler and adventurer who has traveled 47 000 km in 3 years, mostly by hitchhiking.

Back in 2013, Psyman embarked on a journey seemingly without a cause nor an endpoint. His experience started as a response to the anxiety he felt when he realized he had to make an important decision about how he wanted to live his life. He was aware that he only had one go at this wild game and the road seemed to call out to him, presenting a perfect solution. Even though his anxieties and fears were only substituted with new ones coming from questions like “Where am I going to sleep tonight?” or “What am I going to eat tomorrow?”, he pressed on.

Psyman became accustomed to the conditions as he found that connecting with people in new settings allowed him to release all the tension he would normally feel in these unusual circumstances. Throughout his 3 year journey, he’s traveled across Asia, Africa, and Australia, playing his guitar, making art installations, meeting new friends and earning nicknames along the way such as Hamlet, Moses, Noah, Jesus, Guitar Jesus, Robinson Crusoe, Chuck Norris, Funny Man and many more. He traveled more than 47 000 km encountering all kinds of situations, some of which you can read about on his blog called The Nomadic Diaries. He is currently working on a book as well as preparing a documentary.

“I went on a walkabout 5 years ago.” – Psyman OChen

Before his epic journey across three continents that would change the course of his life, Psyman was working in hospitality. His experience in this field is not one he remembers fondly as he was pushed by his employer to the point of having to quit and try his luck elsewhere. As things usually go in life, periods of difficulty are also opportunities to reflect and search within ourselves for what’s really important to us in life. And through self-reflection, Psyman realized that his aspirations were never aimed at achieving financial wealth. After a period of intense pondering, the answer simply came to him and he knew what he had to do.

He sought to spread the message of helping the environment but needed to figure out a way to travel the world without money. Using the principles of barter economy and hitchhiking he managed to cross a staggering 47 000 km, starting with Melbourne and finishing his journey in Israel.

The Benefits of Crossing Borders on the Road

“When you fly, it’s quite a shock when you go to a new land because all airports are built the same. It’s just a shopping center with busses with wings.” – Psyman OChen

Psyman highlights the difference between entering a new country by land and by plain, via an airport. He describes the phenomenon of cultural shock you feel when you experience a social setting that is vastly different from what you’re used to by simply going through the exit doors at the airport. He argues that a much better way to travel is to change the process of your surroundings was done gradually. Your mind will have the time to adjust to subtle differences and you wouldn’t feel like your brain is bombarded with all this new information that you have to process like listening to a new language you don’t understand yet for example.

“Whereas you travel by land, you gradually enter cultures because every culture is quite similar from the one you left to the one you’re entering.” – Psyman OChen

“People will go out of their way to help out a foreigner to show to them: ‘Hey, we’re not like we’re portrayed in the news.’, but then why don’t they do that to their neighbor?” – Psyman OChen

On his travels, Psyman has visited numerous countries across three continents and has discovered friends and was blessed with hospitality everywhere he went. He was very touched by the fact that people were so giving and kind to a man they’ve only just met, but a question always came to his mind as a reaction to this unexpected kindness. Why are people reluctant to treat their neighbors the same way? It is a pattern that he spotted in most countries, even though it might sound counter-intuitive at first. He also talks about how this gregarious experiences across the world changed his perception and his behavior in mundane situations when he came home to Australia.

Aside from being a great conversation about the amazing experiences of traveling across three continents and exploring different cultures, this podcast also presents valuable insight for all those who are bothered and looking for a way of overcoming difficult times, personal crises and dealing with anxiety. Surely, one who has been on the road for three years, without a roof over his head, never knowing where his next meal will come from knows a thing or two about overcoming personal fears? During his time at sea, Psymen has encountered much adversity and insecurity but his simple solution was to always seek and find solace in three simple words:

“Everything will pass.” – Psyman OChen