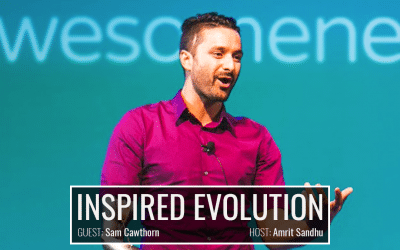 Our guest for this week is Sam Cawthorn, an international bestselling author, motivational speaker, a master professional speaker trainer and the founder CEO of Speakers Institute and Speakers Tribe.

Sam grew up in the rural parts of Tasmania in a big family with 4 sisters and 6 brothers. Their cultural background is a charming mix of Indian and Scottish heritage.

In 2006, Sam was involved in a near-fatal car accident. After being clinically dead for 3 minutes he was brought back but the consequences of the crash were dire. His arm was ripped off just above the elbow and his right leg was so shattered that the doctors predicted he will never walk again. Nevertheless, he fought back hard, defying the odds, modern medicine and embarked on a journey of helping others get through tough times and build their self-esteem. In 2009 he established the Cawthorn Foundation help disadvantaged youth in developing countries to enjoy basic human rights.

Sam has shared his message in 36 countries and he’s influenced millions with his story of resilience, overcoming adversity and finding that “something more” within ourselves. He’s now looking to influence billions by training the next generation of expert public speakers. He founded Speakers Institute and Speakers Tribe hoping he’ll pass on his experiences to those who share a passion for uplifting the world.

Among many recognitions and testimonials to his work is a Young Australian of the Year Award for 2009. He was also voted Edupreneur of the Year in 2015. Through keynote speaking, he has shared the stage with Bill Clinton, Michael Jordan, Richard Branson, and the Dalai Lama,

Sam is also an international bestselling author. He has written many books his latest one being “Storyshowing: How to Stand Out from the Storytellers”, an instruction manual for making connections with people and it reveals a new approach to sharing stories. Rather than telling a story, Sam describes a way of getting your audience more emotionally engaged by using the method of storyshowing. It is a tool for leveling up your communication skills, teaching you how to leave a better and stronger impression on your audience.

In his own words, even though Sam was born a “country farm kid”, he always felt there was something more to his story.

“I was like any other normal kid… but I always knew that there was something deep within me that says that there is more.” – Sam Cawthorn

This knowledge that there’s more to life was like a craving at times. Still, Sam was not immune to wanting to fit in, which nudged him towards hanging out with the wrong crowd and eventually resulted in him getting expelled from school. He never went back to the traditional educational system but he worked his way up to an Australian Federal Government job. Things were looking up. But in October of 2006, Sam experienced a defining moment in his life.

“My defining moment came in the form of a car accident.” – Sam Cawthorn

Sam was driving one night and he suddenly fell asleep at the wheel. He veered to the other side of the road and ended up crashing full speed into a semi-trailer truck. Sam was clinically dead for 3 minutes before thankfully being resuscitated. Having lived to tell the tale, the car accident has left its mark on him both physically and mentally.

“The bottom line is that something had changed. Not only physically, but also emotionally and mentally and then spiritually.” – Sam Cawthorn

He lost his most dominant arm just above the elbow and his right leg was destroyed beyond repair, or so the medical staff thought at that point. Sam recalls his strenuous rehabilitation period but remembers no anxiety, depression or feeling of inconsolable despair. His thoughts went into a different direction and instead, he focused on what he could do that would be best for his children.

Sam became a motivational speaker, a force that moves others that need moving and he uses his profound insight into dealing and overcoming adversity to inspire millions. One recognition after another, he keeps on spreading his influence and thinking up new ways to brighten up people’s lives and give them the courage to show their story.

The Power of Proximity

“There’s now undisputed evidence… that we are the average of our 5 closest friends. The company that we keep determines who we are. – Sam Cawthorn

If you’ve ever listened to one of Sam’s lectures, you’re probably familiar with the phrase “proximity is power”. The idea behind the phrase being, the people we are closely connected to and in who we are in contact regularly will have a profound influence on our personality. But his message is as much as instructive as it is descriptive because in it lies a solution for creating a better version of ourselves. Sam urges us to surround ourselves with and keep the company of those who are helping us become the people we want to be.

“I’m not a storyteller, I’m a storyshower.” – Sam Cawthorn

In his latest book, Sam reveals a brand new method of sharing your story that will make you stand out from the crowd. He has coined the term storyshowing and in while describing it, he contrasts it with storytelling, explaining that “telling something” is both less inspiring and can have a negative connotation. The idea of storyshowing is centered around the notion of making your story memorable by exploring the emotional side and pointing out how is it relevant for the listener. This approach will help you grab the attention of your audience, it will drive your argument home and hopefully, inspire a meaningful transformation while providing the listeners with enough guidance to complete it.

“It’s about showing how the story is relevant to the listener rather than just telling someone an experience.” – Sam Cawthorn

Listening to inspiring stories about inspiring people is something that we’re used to here at the Inspired Evolution. Yet I still can’t get my head around how beautiful the stories people share with us are and how every single one has fresh insight into the intricacies of the world and the people around us. Aside from showing us the importance of showing stories, Sam also underlines the fact that each of us has a story to show. The key is finding a way to make your story relevant for others and Sam believes that it is something each of us has the ability to do.