Trust What Brings You Joy with Sam Maher 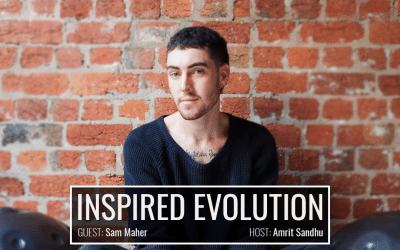 Our guest for this week is Sam Maher, an instrumentalist and drummer better known for his unique playing style on the handpan.

Sam is a very experienced drummer, having worked with bands and artist such as Methyl Ethel, Katy Steele (Little Birdy), Rabbit Island, Grace Woodroofe, Nicholas Allbrook (POND, Tame Impala) and countless other groups based in Perth. But only 6 months after discovering the handpan, Sam decided to travel to the Americas. Over the course of 15 months, he has explored regions from Mexico City all the way south to the Patagonian region of Argentina, surviving mostly from the money he made busking on the streets. Sam has now performed his boundless music in over 22 countries and counting.

In 2015, he unexpectedly reached new levels of fame when he was approached to make a video by the YouTube channel BUSKRS. They recorded and produced a video of Sam improvising a session on his handpan in New York and the video went viral quickly after being uploaded. To this day it has racked up over 2.8 million views with overwhelmingly positive reviews, and you can check it out here!

Sam has also spoken at a TEDMED conference about the transcendent power of music. Along with a touching performance, he discussed his personal experience with the handpan, how much has the music changed and affected him, and he also explored the communicative nature of music.

Prior to being propelled by a spontaneous YouTube video going viral, Sam’s journey has been one accompanied by struggles, from both a personal and a professional standpoint.

“I was really burning the candle at both ends because I was playing in about five bands, I was working full time and I was just really burnt out.” – Sam Maher

With a full-time job on one end and an exhausting nightlife of endless gigs on the other, Sam found himself at a position of feeling emotionally drained. Around that same time, he discovered the handpan, and straight away he felt a connection with the instrument. In his own words, playing the handpan has opened up new worlds for him and for his audience as well.

“I sat down on the side of the street and just started playing, and all of a sudden people would sort of gather around, and I had an older Aboriginal woman sitting down next to me weeping. It just opened up so many worlds for me, in that instant.” – Sam Maher

He realized that he was ready and that he needed to experience different cultures, learn through traveling and better understand himself. He sold everything and embarked on a journey over the Americas, with a plan to make a living through busking. Purposefully seeking to get in contact with the locals in order to connect with the way they’re living their everyday lives has led him on a path of personal growth.

“To consider myself successful, I feel like I constantly need to be exposed to new worlds and new cultures.” – Sam Maher

The Benefits of Pushing Yourself Out of Your Comfort Zone

Leaving his home for 15 months was not an easy decision. Sam was aware that he would miss certain important moments in the lives of his friends and family. But he knew that in order to truly achieve relevant progress and development he needed to take a big step outside of his comfort zone.

“It’s good to be uncomfortable. It’s a good trait for a human to be ok being uncomfortable at times.” – Sam Maher

Being able to sustain yourself in the moments of discomfort is a useful skill in life, and Sam wittingly makes note of this. It is good to have a playful relationship with being uncomfortable and there is a very good reason when we should push ourselves beyond the comfort zone even in moments when life seems easy. Because at times we’re going to run into adversities that are beyond our control. It is at those times precisely when our lifelong training of dealing with discomfort comes in handy.

Searching for a New Sound

In terms of finding his sound, Sam is seeking to explore different genres and change the way people make music with the handpan. He has experimented with adding electronic music in an attempt to creatively challenge himself. Reestablishing the rules of how an instrument is played may not an easy task, but nevertheless, he is determined to continue on this path as the challenge makes it all the more rewarding.

“I’m always looking for the push or pull, or the question and the answer.” – Sam Maher

Finding a Purpose in Things That Bring Us Joy

“There’s been no more important time to find something for yourself that works.” – Sam Maher

Sam recognizes the importance of living a life true to your purpose and depicts it as one of the foundations to a good mental health. His journey has been difficult at times, but the fact that he knew what he needed from life and the way he unconditionally gave himself to the things that brought him joy is a true inspiration. We need to be in line with our values. Our actions have to be accompanied by a sense of purpose and joy in order to make sense. Otherwise, we’re just playing games with ourselves. That is why Sam invites us to:

“Trust those things that make you feel really, really good when you do them.” – Sam Maher