Come of Age with Stephen Jenkinson 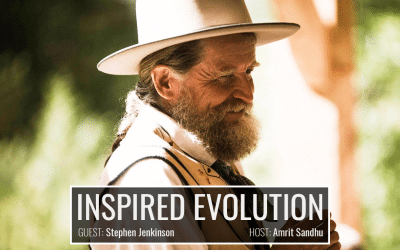 Our guest for this week is Stephen Jenkinson, a culture activist, teacher, author, ceremonialist and founder of the Orphan Wisdom School.

Stephen’s educational background includes masters degrees in Theology and Social Work. He is renowned for his work regarding grief and dying all over North America. Years of working with people who are either dying or experiencing the loss of a loved one have given him profound insight into how we perceive, interpret and deal with death. Throughout his career, he was performing roles such as programme director in a major Canadian hospital and assistant professor in a prominent Canadian medical school. He has also worked as a consultant to palliative care and hospice organizations and educator and advocate in the helping professions.

Stephen founded Orphan Wisdom School back in 2010, a teaching house and a learning house for the skills of deep living and making human culture. The name “orphan” describes people whose culture has been built upon mass migration, but as Stephen puts it “not knowing where you are from is not the same thing as being from nowhere”. The philosophy of Orphan Wisdom School is rooted in “knowing history, being claimed by ancestry and working for a time we may not see”.

He was also the subject of the feature-length documentary film titled “Griefwalker” released in 2008. In the film, you get to experience and witness not only Stephen’s work and teachings of palliative care but his thoughts on culture, community, and the need for elders. He has produced a 10 part series called “The Haiku Sessions” which are created based on his live recorded teachings.

Stephen has authored two books. In 2015, he published “Die Wise: A Manifesto for Sanity and Soul” which works as a guide for dying well by learning the right skills through the process of living well. His latest book is called “Come of Age: The Case for Elderhood in a Time of Trouble”. It was released in 2018 and in it, Stephen makes the case for birthing “a new generation of elders, one poised and willing to be true stewards of the planet and its species”.

For the next several weeks, Stephen will be touring Australia and New Zealand with his latest book. You can expect events such as author reading and reportage, all day talks and festival appearances. Check out the dates of his tour here!

“Anyone who speaks with authority about one’s own life has been reading the wrong mail.” – Stephen Jenkinson

Stephen plays an active role in something that he likes to call “the death trade”. To give a better explanation of what he means by that, he takes us back to a moment in his life when it all began. He was approached with an offer and the idea behind it was that Stephen would organize a support group for men who were having trouble coping with losing important people in their lives

“I would take the little job which was to do a six-week group for these guys and I didn’t have any idea what I was going to do.” – Stephen Jenkinson

Even though he wasn’t a “corporate guy”, he decided not to pass on an opportunity to help others in their time of need. But he was faced with a new conundrum. It became pretty clear to him that men aren’t that open to participating in emotional support groups that were exclusively for men. Most people would either give up in a situation like this, or try to change the conditions of their role, but Stephen actually saw potential in this particular challenge. He knew that even though he would have to face some drawbacks and that people would be reluctant to join his group, he also knew that all of these men were sharing the same situation and had several characteristics that would allow them to bond.

“That’s the group it’s going to be. A men’s group for men who don’t want to be in a group for men.” – Stephen Jenkinson

Stephen managed to persuade and form a group that had around 7 or 8 members in the beginning. After a few sessions, it became apparent to Stephen that the main topic they should devote their time to in their discussions is anger. Because even though anger is a perfectly natural response, it has been completely rejected by Western society. He noticed that the members of his group were very reliant on their anger but were also very ashamed for feeling and responding in such a way to the situation they’re in.

“They were so good at anger, basically, to cover something that they had very little practice at and that was the art and the skillfulness of being sad.” – Stephen Jenkinson

The shift in the topic actually resulted in the group being dubbed as “Sad School” but the value of these meetings is reflected in the fact that the six-week group ended up lasting around 18 months. It was there that Stephen had found his calling and discovered a new sense of purpose.

What Does It Mean to Be an Elder?

The variety and scale of topics discussed in this podcast surpass the limits of our humble show notes. But let’s focus on Stephen’s understanding of the roles elders play or at least should play in our society. A lot of other concepts in Stephen’s teachings can be connected to this theme. He goes on to explain the meaning behind the phrase “respect your elders” and essentially analyses the implications of different ways of comprehending this message. He believes the formula has a sort of a “two-part interpretation” and that in our society only one is present.

“The part that never appears, that nobody talks about… is, you respect your elders in part because they have carried themselves in a respectable way.” – Stephen Jenkinson

One of the most profound aspects of his teaching regarding the topic of elders is that Stephen understands it is a role to be earned. It’s not a simple consequence of having lived a certain number of years, you should have also behaved and represented yourself in a manner that will incite the respect of younger generations. It should also be pointed out that “respect” in this context is a complex term that also holds within itself the idea of “seeking guidance”. We dive very deep into the very core of the topic in our conversation.

Talking to Stephen feels like talking to a profound-quote machine, but you immediately understand that the description would make no sense because of the fact his sincere humanity takes over you in an instant. I’ve been a fan of his work for quite some time and making this podcast was an amazing experience and a true privilege. I hope you’ll discover much of the same things that drew me to him in the first place when you listen to our conversation. Finally, I could probably take any of his innumerable messages he has crafted with such verbal excellence that there’s no hiding the fact he is a true artist as well. I’ve decided to go with one that resonates with the heart of our show and I’m sincerely hoping it will inspire an evolution within all:

“What limit really is, is the opportunity for your style finally to appear.” – Stephen Jenkinson