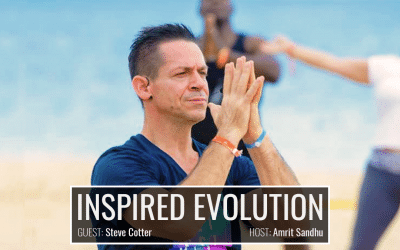 Our guest for this week is Steve Cotter, a renowned personal trainer, and founder of the International Kettlebell and Fitness Federation.

Steve has been a part of the fitness industry for over 30 years. He perfected his knowledge and skills about strengthening and physical conditioning of the human body through the practice of many different disciplines including martial arts, qigong, mobility, flexibility, and Kettlebell training. He founded the International Kettlebell and Fitness Federation with a goal of promoting Kettlebell training on a global scale, but also to provide the support for people interested in developing the skills necessary for accelerating a fitness-oriented business. Steve is determined to teach and share his unique story with a goal of promoting health, happiness, and longevity through fitness.

Aside from being a certified Strength and Conditioning Specialist, Steve has made his mark as an athlete in several fields. One of his impressive recognitions is a bronze medal at 1996 World Kuoshu Games in Taiwan and he has held the title of the US Full Contact Champion twice. He also captained the first ever USA Team to compete in World Championships of Girevoy Sport. As a personal trainer, he is well-known for working with elite athletes, professional football teams, Navy SEALs, and members of the U.S. Marine Corps.

Steve is one of the most renowned Kettlebell promoters in the world. He wrote a book called “Kettlebell Training”, a guide for using the Kettlebell for improving your strength, stamina, coordination, and overall fitness. It offers 95 exercises accompanied by step-by-step instructions on how to perform them correctly and getting the most out of each exercise. In 2011, he released a DVD-series titled Extreme Kettlebell Workout which demonstrates over 100 techniques and 10 workouts, covering topics such as muscle building, core development, and cardio.

“I’m an artist, I’m a movement artist. By trade, my foundation is in the martial arts and essentially, the study of the martial, which is the warfare is so that we don’t have to fight.” – Steve Cotter

Steve was brought up in the physical culture and got involved with martial arts at the young age of 12. He then taught martial art professionally in his youth, but in his late twenties realized that it was time to look for a different career path and a new challenge. Through everyday training, he has built up a strong foundation for a shift towards the fitness side of things. He went on to get a Bachelor’s degree in Kinesiology from the San Diego State University and moved in the direction of personal training.

Around the early 2000s, Steve became one of the early adopters of Kettlebell training, which opened up an entirely new world for him. The practice of using Kettlebells was several hundred years old at the time but Steve saw an opportunity to promote it all over the world, not just in the US.

“What I’ve evolved to understand is that everything is mental.” – Steve Cotter

Throughout his career, Steve has continuously developed a closer understanding of the mental side of fitness and how it related to overall health. Although recognizing the essential part the body plays in exercise, he became vastly more interested in the role of the mind. He describes the body as the “vehicle” that we need to take care of but also points out that having a fit body doesn’t necessarily guarantee a healthy life.

“What I observed is that in many cases, a person can be fit but not be healthy. They can show certain external parameters of fitness but internally they may be miserable because of certain lifestyle habits or largely because of beliefs.” – Steve Cotter

Steve went on to develop the concept of health-happiness, recognizing it as our highest potential with an end goal of becoming more present and mindful.

The Power of Breathing and Controlling the Breath

“Most fundamental of all – everybody breathes. So the first technique and the last technique is breathing.” – Steve Cotter

Steve provides us with his own interpretation of the mind-body-and-spirit trinity, molding it into something that could be closer to our experience which is mind, body, and breath. He goes on to explain how the body is something we recognize as very tactile, the mind is understood through the concept of consciousness but he introduces breath as the connection between the two. By harmonizing the breath with the movement we are given with an opportunity for integrating the body and the mind.

“The breath is the connection between the mind and the body.” – Steve Cotter

We’ve discussed the connection between vitality and liberating consciousness at length and in order to get the complete interpretation of the topic you should definitely check out the podcast. We also go deep into the transferable nature of energy and how meditation contributes to the purposefulness of our movement which is one of the ways for becoming more energetic. It is clear that our modern lifestyle is very dynamic on the level of the mind but for most of us, not so much in regards to the physical. Steve acknowledges that exercise is a relatively modern invention with the purpose of restoring the offset in the balance we’re experiencing due to the way our lives are organized today.

“Vitality is fundamental to the engine of our existence, our being. Without vitality, there is not the drive to create.” – Steve Cotter

Steve’s work is a testament to what can be achieved with dedication, understanding your values and having an approach of life-long learning. His diverse educational background has provided him with a broad perspective and in his teachings, we are given exclusive glimpses into his unique worldview throughout the conversation. Steve has made a name for himself helping others achieve and maintain a healthy lifestyle, but the beauty of his story lies in the fact that his work resonates with his passion every step of the way. Having that in mind, it’s no surprise his message of inspired evolution while very direct is also pleasantly simple: