Steven Kotler on The Future is Faster Than You Think 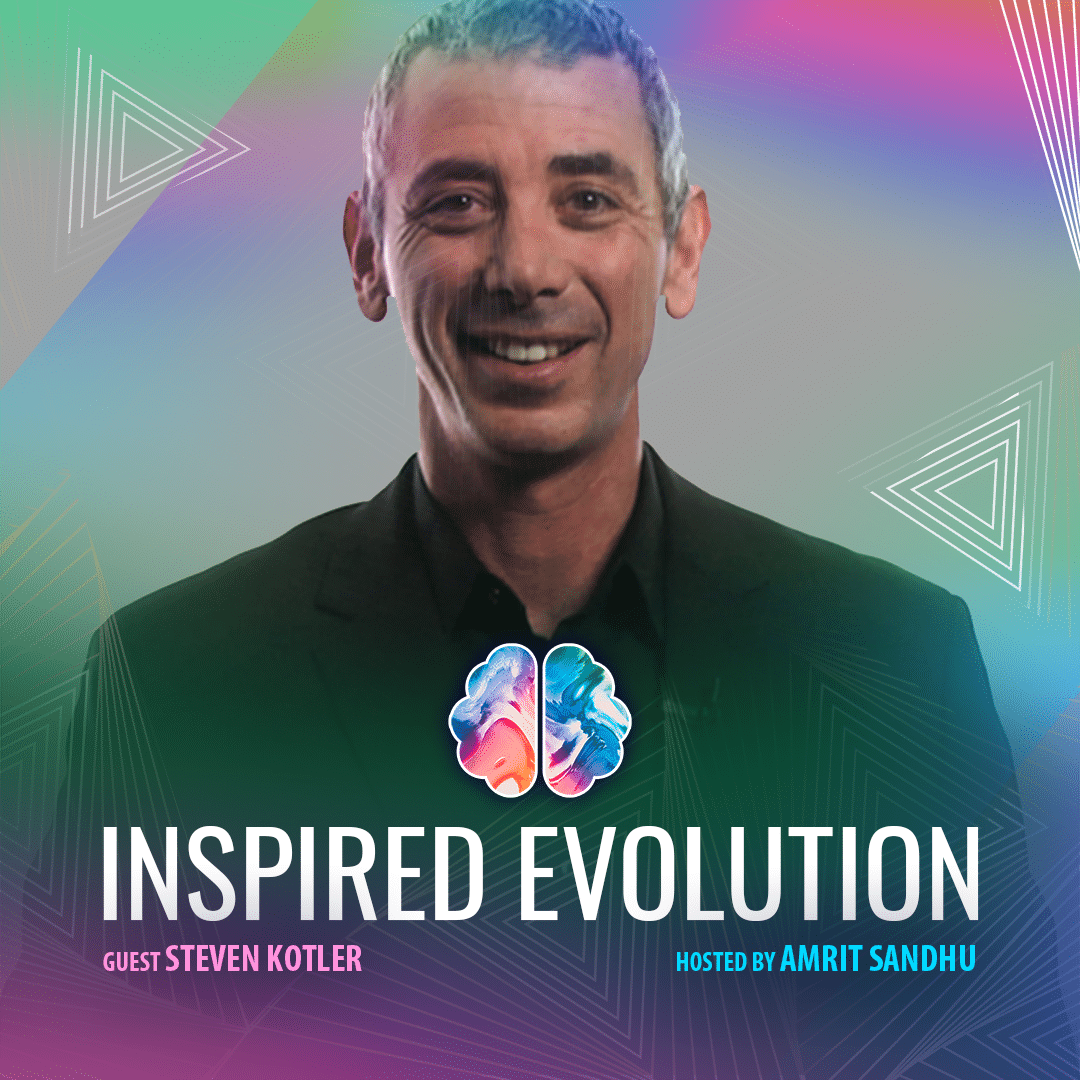 Our guest this week is Steven Kotler, a New York Times best-selling author and an award-winning journalist. His latest book “The Future Is Faster Than You Think” is available HERE.

“Zero to Dangerous is a neuroscience-based peak performance training for entrepreneurs and leaders struggling with distraction, self sabotage and uncertainty.”

Learn more about this opportunity HERE and mention Inspired Evolution when enquiring for a free coaching session valued at USD$1,000.

How To Turn Extraordinary Performance Into An Effortless Habit – The Habit of Ferocity accessible with a Mindvalley All Access Pass https://inspiredevolution.com/recommends/mindvalley/

As the Executive Director of the Flow Research Collective, he is one of the world’s leading experts on high performance. His most recent work, The Future Is Faster Than You Think, is a blueprint for how our world will change in response to the next ten years of rapid technological disruption. He co-wrote the book with Peter Diamandis as the last book in their Exponential Mindset Trilogy which started off with the book Abundance, where they tackled grand global challenges, such as poverty, hunger, and energy, followed by Bold, where they chronicled the use of exponential technologies that allowed the emergence of powerful new entrepreneurs.

Steven is also the co-founder of Creating Equilibrium, a conference/concert/innovation accelerator focused on solving critical environmental challenges, and, alongside his wife, author Joy Nicholson, Steven is the cofounder of Rancho de Chihuahua, a hospice care/special needs care dog sanctuary in the mountains of Northern New Mexico. He also co-founded the Flow Genome Project in order to answer questions such as the relationship between flow and creativity, flow and business success, as well as to explore altered states of consciousness and their effect on human performance.

His book, Stealing Fire, was a national bestseller and nominated for a Pulitzer Prize. It documents an underground revolution in peak performance that is rapidly going mainstream, fueling a trillion-dollar economy and forcing us to rethink how we lead more satisfying, productive and meaningful lives. This work was preceded by two books about the technology, Tomorrowland, which is about those maverick innovators who transformed science-fiction ideas into science fact technology and Bold, which was called a “visionary roadmap for change,” by president Bill Clinton and spent many months atop both the New York Times and Wall Street Journal bestseller lists.

His previous book, The Rise of Superman, was one of the most talked-about books in 2013 and the first book in history to land on the New York Times bestseller lists in the sports, science, psychology, and business categories simultaneously. In Rise, Steven decodes the science of flow, an optimal state of consciousness where we feel our best and perform our best.

Just as Rise explores the upper limits of individual possibility, his book, Abundance, explores the upper limits of societal possibility, breaking down four emerging forces that give humanity the potential to significantly raise global standards of living over the next 20 to 30 years. Abundance spent 10 weeks atop the New York Times bestseller list and appeared on four prestigious “Best Book of the Year” lists.

A Small, Furry Prayer, Steven’s book about the relationship between humans and animals, was a national bestseller and nominated for a Pulitzer Prize; West of Jesus, which examines the neurobiology of spiritual experience, was a Pen/West finalist; and his bestselling novel, The Angle Quickest For Flight, won the William L. Crawford IAFA Fantasy Award.

Steven’s work has been translated into over 40 languages and appeared in over 100 publications, including The New York Times, Atlantic Monthly, Wall Street Journal, Forbes, Wired and TIME. He also appears frequently on television and radio and lectures widely on human performance, disruptive technology, and radical innovation.

Steven highlights that we currently have an epidemic of fear and an epidemic disease and that in the world today we have local and linear brains that are used to slow change, but then we live in a global and exponential world, and so our brains cannot process exponential change. There have been fears that the Coronavirus might become worse and that economies might nosedive, but those are all maybes and the brain cannot deal with them because it’s designed to go on and off. Steven and his team were looking at peak performance at the time of pandemics and through positive psychology, they’ve come up with three very good solutions including, gratitude practice, mindfulness practice, and exercise. Those three things help in resetting the nervous system and they’re the only way one can shut off a hyper-vigilant response to exponential threats.

Exponential technology is any technology that doubles on a regular basis. Computers are a clear example because every 18 months they get twice as fast and their cost stays the same because of the number of integrated circuits that they can fit in a computer chip doubles. A virus spreading across the globe is also a great example. Technologies like AI, robotics, biotechnology, nanotechnology, sensors, computing, and others are accelerating exponentially and they are now starting to converge exponentially. Their exponential convergence is when, for example, AI meets robotics. Flying cars will soon be made possible by the convergence of technology.

“When you’re dealing with exponentials, they get big really fast” – Steve Kotler

Despite the rumors that move around about AI and certain countries gaining power over others by owning all the technology around that, the fact is that all the major and disruptive technologies are open-sourced. Google’s super AI as well as other technologies are free online. Steven and his team at the Flow Research Collective are working very hard to build the world’s first bio-physical base flow detector (something that can monitor a person’s brain and body, and tell them if they’re in flow). They are going to couple that technology with BR to create the world’s first high flow accelerated learning environment, and they will be building for accelerating worker relearning. Steven’s core goal for developing that technology is to decode flow and develop the best flow training in the history of the universe.

In transportation, there are the efforts car companies are making towards the development of flying cars and autonomous vehicles. Every major car company is rolling out autonomous vehicles this year. Waymo for example, is looking to be doing one million autonomous taxi rides a day. Steven believes the Coronavirus will speed up the unveiling of these vehicles because riders will be alone in the taxis and the vehicles can be sterilized between uses. There is the Hyperloop technology (high-speed trains that can do 750 miles per hour which means one can travel from Las Vegas to Los Angeles in 20 minutes) and there are 25 such projects in the world today. Elon Musk has his Boring Company where he is drilling tunnels under major cities to build high-speed conveyor belts and he says his rockets will be taking people to Mars in 2030. Musk also said that by the end of the decade, his rockets will be able to do London to Shanghai in 39 minutes, and so could be used for terrestrial transport as well. So much in people’s daily lives as they know it will change drastically with all these changes in transportation technology. The same changes in technology will apply to all major industries including healthcare.

“Personal auto insurance may go away because individual car ownership may go away, because we’re moving to car as a service” – Steve Kotler

The average corporate lifespan between the 20s and 50s was 67 years, and today is less than 14 years. 40% of the world’s Fortune 500 companies are going to be gone within the next 10 years. All that is because of the way technology changes so rapidly. There have been studies of companies that have been around for phenomenally long times like 500 to 700 years, and the discovery has been on what preserves companies for a very long time. A great highlight of this issue of corporate legacy is when Jeff Bezos admitted to his shareholders that he believed Amazon would be out of business within 25 years. Steven feels that companies are now going to be just a vehicle for an idea.

The Future is Faster Than You Think book is a blueprint that looks at the 11 biggest industries in the world and tracks them for the next 10 years to look at where the convergences and disruptions are and determine what’s coming in terms of new technologies, business models, and market opportunities. It was inspired by the converging exponentials and the fact that the scale of disruption and opportunity is increasing in orders of magnitude. When they wrote Abundance and Bold, they were talking about individual exponentials that disrupt services and markets, but converging exponentials disrupt markets, institutions, and all the systems that support them in very dramatic ways. The book is optimistic and seeks to future proof people against the next ten years.

It was not easy, and Steven and Peter had a team from Singularity University, Abundance 360, and other teams that they tapped on a regular basis for the book. It also helped a lot that Peter has been in business for a long time and has founded 22 companies while Steven has been covering cutting edge technology as a journalist and author for over 30 years. A great example is the fact that quantum computing is now a reality, but he had written about it in the 1990s when David Deutsch published a book on it.