Empathy for All with Steven Kotler 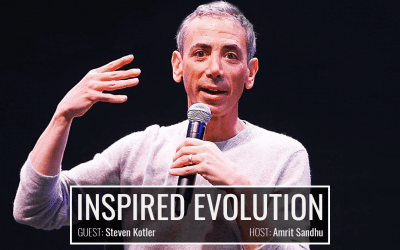 Our guest for this week is Steven Kotler, a best-selling author, award-winning journalist, and entrepreneur.

Steven is a leading expert on ultimate performance and the state of flow. He co-founded the Flow Genome Project in order to answer questions such as the relationship between flow and creativity, flow and business success, as well as to explore altered states of consciousness and their effect on human performance. Other organizations he has founded are Creating Equilibrium, a conference dedicated to solving critical environmental challenges, and Rancho de Chihuahua, a hospice care dog sanctuary in the mountains of Northern New Mexico he co-founded with his wife Joy.

Steven is also a renowned, best-selling author with 2 Pulitzer Prize nominations to his work on “Stealing Fire” and “A Small, Furry Prayer”. His latest book called “Last Tango In Cyberspace” is a brilliantly well-researched novel which explores the future we may be living in just 5 years from now. The book is inspired by cutting edge technology which is still exclusively available in modern labs across the world. His predictions are based on years of researching the frontiers of neuroscience, psychology, psychopharmacology, and ecology, with a special appreciation for the progress of animal rights. Using this Sci-Fi setting, Steven dives into topics such as the evolution of empathy, the nature of consciousness, and our definition of “life.”

What Will Our World Look Like 5 Years From Now?

Steven has always been fascinated by technological advancements and he’s heavily invested in studying the forefronts of cutting-edge tech. He recognizes that the future will not come one new tech at a time but as a combination of complementary discoveries which will completely reshape the world we live in. He wrote “Last Tango in Cyberspace” in order to try and visualize what that world might look like 5 years from now, based on his insights into the technology available in some of the best labs and research centers in the world.

Even though most people view his book as futuristic, Steven firmly states that he was very conservative about what went into the book and steered away from making speculations and statements he wasn’t clear about. He also sees that the reason why making these types of predictions is extremely difficult is that rapid technological advancements have affected our ability to analyze and extrapolate about our progress:

“We can’t look back 5 years and go: “Well, what was happening 5 years ago? I can use that to make a prediction.” Because it’s accelerating so quickly.” – Steven Kotler

The future tech works as a well-researched context in the “Last Tango In Cyberspace” but the book actually deals with questions related to humanity and one of the key messages emerging regards the notion of empathy. Throughout our conversation, you can see that Steven is very excited about connection and the interconnectedness of the world that we’re living in. He puts empathy at the core of our humane values but the idea he calls “empathy for all” concerns not only empathy towards and among humans but animals, plants, ecosystems… He sees that the only way we can move forward when facing some of the biggest challenges of today’s world is that we base our efforts on empathy.

“We have the technology to meet these challenges… What we don’t have is the cooperation.” – Steven Kotler

The Future of AI

“What’s getting a lot of attention lately is: “Holly crap an AI is going to wake up and kill us all!”… But that’s not the point… It doesn’t matter. Because we’re not going to be able to tell if it’s awake or not.” – Steven Kotler

We proceed to explore the current use of AI technology and what we can expect from advancements in that field in the near future. We go over some of the applications of AI in human therapy and psychological consultation. Steven goes on to describe the Ellie military project. Ellie is a virtual AI therapist that is designed to help detect PTSD symptoms in war veterans and Steven had a chance to test it out personally. Another platform that we’ve discussed is Xiaoice, a Microsoft bot based on emotional computing framework.

These bots are a great example which demonstrates how quickly the AI is advancing, especially when interacting with humans directly. However, there’s another interesting observation to be made here and which is that AI has already started influencing how we make major decisions in life, the effects of which will drastically increase in the near future.

“Some couple was going to break up and stayed together because of Xiaoice and I’ll bet they have a baby. Which is, to say, that the first AI-inspired baby is probably already in existence and that’s a little weird! – Steven Kotler

The Relationship Between Curiosity and Fear

At the very end of our podcast, you can see that we’ve put in a little extra for this week’s episode. We were finished with our official recording but Steven kept dropping little gems and we just had to get them out to you as well. We got to chatting about how curiosity is innate to our perspective and Steven reflected on the relationship between curiosity and fear. He pointed out that animals can’t feel the two at the same time, but they will rather go back and forth between the two. Humans can do it, but since the two emotions are using very similar neural pathways and have a similar neurochemical reaction at its foundation, Steven blessed us with a lovely life hack for getting over our fears.

“One of the best ways to deal with fear is to get curious about the shit that scares you.” – Steven Kotler

I can’t even begin to describe what this conversation meant to me personally but I truly believe that this podcast has something in it for everyone to enjoy. We’ve covered a broad range of modern topics and Steven’s insight into the next generation of technology is mindblowing. But what I’ve particularly appreciated was our discussions on empathy.

His notion “empathy for all” is something that’s been magnificently depicted in his latest book and I’m very excited to see where this idea takes him next. Steven firmly believes that empathy will play a key role in resolving some of the biggest global, modern-day issues we’re currently faced with:

“I think empathy is the future.” – Steven Kotler